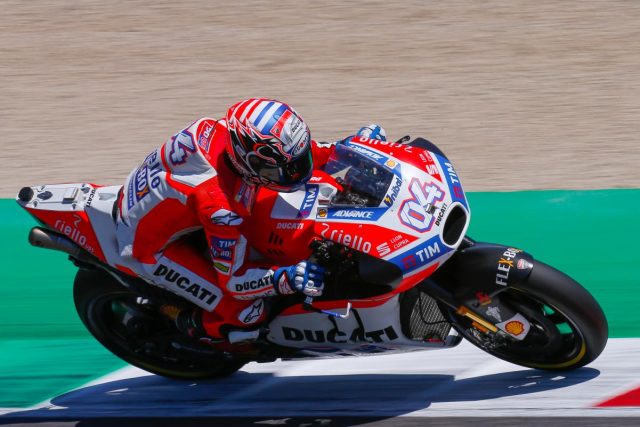 Andrea Dovizioso has helped deliver a stellar day for Ducati, becoming the first Italian to win on the Italian bike in Mugello.

Dovizioso became the fourth different race leader on Lap 14 after an exhilarating start and went on to finish as the first of five Ducatis in the top 10.

Maverick Viñales extended his championship lead courtesy of a second-place finish in the 23-lap race, with Danilo Petrucci also on the podium.

Valentino Rossi was the first man to lead the race as he got a good launch from the middle of the front row, leading his Movistar Yamaha team-mate Viñales and the two factory Ducatis of a fast-starting Lorenzo and Dovizioso through Lap 1.

Lorenzo was the first to demonstrate the Ducatis’ significant straight-line advantage as he passed both factory Yamahas at the start of Lap 2, though he had to pass Rossi a second time after running wide at Turn 1.

Rossi got the lead back at Scarperia and the pattern repeated on Lap 3, but this time Viñales followed bike #46 past Lorenzo.

Lap 4 saw Rossi and Viñales swap the lead three times before Dovizioso passed his countryman to run second, having dropped to a race low of fifth just two laps earlier.

Rossi reclaimed second at the start of Lap 5, but held it for only a lap before Dovizioso returned the favour up the main straight next time around, as Petrucci caught up to the leading trio on his Pramac Ducati.

The race settled into a rhythm for the next half-dozen laps before Dovizioso made his move on the run up the main straight into Lap 14.

Bike #04 then began to pull away as Petrucci got underneath Rossi and then Viñales at the Bucine corner on consecutive laps, the Spaniard having opened the door when he ran slightly wide.

Viñales finally recovered second position just over four laps later, on Lap 20, by which time Dovizioso was more than a second up the road and wouldn’t be caught.

In the end, the margin of victory was 1.281s for the 31-year-old Italian, who claimed a third career MotoGP race win, his second for Ducati, despite sitting out the warm-up due to food poisoning and then surviving a huge moment at the top of the main straight early in the race.

215mph wheelie from the first Italian rider to win the #ItalianGP on a Ducati.#AD04 🇮🇹🙌 pic.twitter.com/C1a9wBi402

Viñales’ second position puts him in a commanding championship position, now leading by more than a full race over Dovizioso after Dani Pedrosa crashed out.

Alvaro Bautista (Aspar Ducati) and Marquez (Repsol Honda) ran together for much of the race to finish fifth and sixth respectively, the latter the first of the struggling Honda contingent.

Pedrosa lost second position in the championship when he went down on the final lap and took Cal Crutchlow with him as he tried to pass the LCR Honda for 11th.

MotoGP now makes a quick trip across the continent for Round 7 in Catalunya on June 9-11.

Championship points: After Round 6