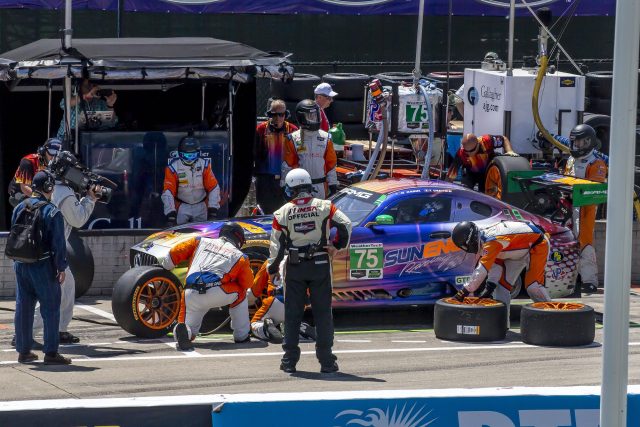 The SunEnergy1 Racing team owner and French team-mate Tristan Vautier had enjoyed a strong showing in the build-up to the Belle Isle weekend.

Vautier led the times during the majority of the first practice session and the Silver-rated Habul excelled in qualifying to make the top 10 and be only 0.2s off the GT Daytona class championship leader.

However, the team’s hopes of repeating their Circuit of The Americas podium were dashed before the green flag when debris caught between the left-front wheel and the brake caliper caused the inside of the wheel to split.

The North Carolina-based expatriate, who said that the tyre deflation “sounded like a shotgun going off,” was able to make it back to pit lane but the team lost two laps repairing the damage.

“I’m okay; a little bit sore to be honest because that was a big hit,” Habul said.

“This was one of those weird weekends. We went out on the warm-up lap and the wheel exploded; it was one of the strangest things I’ve ever seen.

“We limped around and changed the wheel and tyre, and then I went out and basically had no brake on the left front.

“That was a problem trying to stop and then I went down into Turn 3 and there were no brakes at all off a sudden. It looks like the caliper ground through the rim.

Here’s the wheel that put us on the back foot and down a couple of laps at the start. Today just wasn’t our day 😥 pic.twitter.com/6foU5CKVha

While Habul made it back to the pits again, the damage was too severe for Vautier to record any race laps.

“It just wasn’t our day today. Something happened with the wheel. We broke a rim on the warm-up lap and then the wheel that just came off the car has a weird mark as well,” said Vautier.

“We don’t really know what happened yet but something happened and he couldn’t stop.

“We feel very bad for the Visit Florida guys because that ended their race but something happened when Kenny got into the braking zone.

“It is a real shame to only be able to get a couple of laps under our belt in the race.”

Meanwhile, not even a 12th place starting berth could stop the Taylor brothers, who remain unbeaten in outright competition through the first five races of the 2017 IMSA WeatherTech SportsCar Championship.

Ricky Taylor had clouted the wall during qualifying and was thus sent to the rear of the Prototype class grid as punishment for causing the abandonment of qualifying.

However, he made positions during his starting stint before pit strategy helped Jordan Taylor bring the #10 Cadillac DPi-VR home in first position.

Round 6 of the championship, the 6 Hours of The Glen, will be held at Watkins Glen International on June 29-July 2.