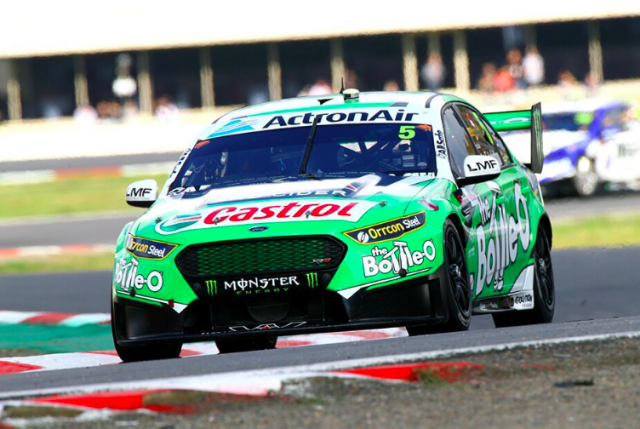 Establishing a strong base set-up is Mark Winterbottom’s core aim for next week’s Winton test having struggled for consistency with his Prodrive Falcon this season.

The 2015 Supercars champion has endured a rough start to the campaign having lost valuable set-up time adjusting to the new control Dunlop tyres due to engine and brake issues at the opening two events.

Working with a new engineer this year in Brendan Hogan, Winterbottom says the team has struggled to find a direction with set-up, resulting in an unpredictable car during the opening portion of the year.

While Prodrive has developments to trial at Winton on Tuesday, the 36-year-old admits he is in desperate need of a test day to address fundamental set-up concerns.

Winterbottom, lying seventh in the standings, has just one podium finish to his name at Phillip Island this year.

“For us it is massively important to get on top of it (the set-up),” Winterbottom told Speedcafe.com.

“We have had a rough start and without making excuses we haven’t been good enough.

“We are struggling a bit at the moment with direction on what we are doing.

“Clipsal and AGP were write offs for us because of the brake issues.

“We really didn’t get a chance to set the car up and there has been a lot of wet practices on Fridays, so we have missed out on the super soft tyres in terms of what to do.

“There is always bits that the team are coming up with but for me it is more about set-up.

“We have not had a good base. My team-mates Chaz (Mostert) and Cam (Waters) have got a better base, but they have got different set-ups so you can’t just swap and change, you have to try and find your own.

“When we get it right the car is actually not too bad, but we just haven’t got it right enough.

“You go out not knowing what the car is going to do, it is not predictable.

“It doesn’t need a heap of stuff thrown at it and when it works we can definitely match the front runners and beat them.”

Prodrive will be joined at Winton by Garry Rogers Motorsport and a sole Nissan Altima, which will be driven by Bryce Fullwood.

Fullwood is completing an evaluation day in the chassis currently raced by Rick Kelly, which he will take over in Dunlop Super 2 from Townsville in July.

Meanwhile, Triple Eight, DJR Team Penske and Tekno Autosports will head to Queensland Raceway on Tuesday for their second test day of their allocation.

Given the amount of running to be carried out next week, Winterbottom expects the tests to be just as competitive as race weekends as teams look for crucial improvements, which will help determine the next section of the season.

“Everyone keeps an eye on each other so it is pretty competitive out there,” he added.

“You test with everyone so you know what everyone is doing.

“The season has gone that quick so we haven’t really had the chance to implement any new items.

“If you started the year strong you stayed strong and that is what we have seen.”

The championship resumes at the CrownBet Darwin Triple Crown from June 16-18.