A digital rendering of the Supercars circuit layout, showing the Foreshore Park in the centre and Hunter River on the right

The Newcastle International SuperMoto has been temporarily shifted out of the city’s East End due to construction works associated with the Newcastle 500 Supercars event.

The 2017 edition, which will incorporate the inaugural FIM Oceania SuperMoto Championship, has moved from Newcastle East to the Newcastle Showground in the city’s inner west, near Hunter Stadium.

The event, which began in 2015, has previously run on roads adjacent to the Hunter River and Newcastle East’s Foreshore Park.

Those roads will now form the main straight/pit lane of the new Supercars street circuit, while the park behind will sit in the infield.

However, the move is expected to be temporary with Newcastle East currently in the midst of major civil works in order to prepare for the first running of a Supercars event in New South Wales’ second-largest city.

“Due to extensive civil works taking place at the Newcastle Foreshore this year, it was decided that the event should make a temporary move to the Newcastle Showground,” read a statement issued by Newcastle International SuperMoto organisers.

“However, this move not only gives us greater certainty for the event, but also a technically challenging track worthy of hosting the 2017 FIM Oceania SuperMoto Championship and a more exciting, more viewable series of activities.

“The event will move back to the Newcastle Foreshore in 2018.”

The Newcastle International SuperMoto will be held on September 2-3, while the Coates Hire Newcastle 500 is set down for November 24-26. 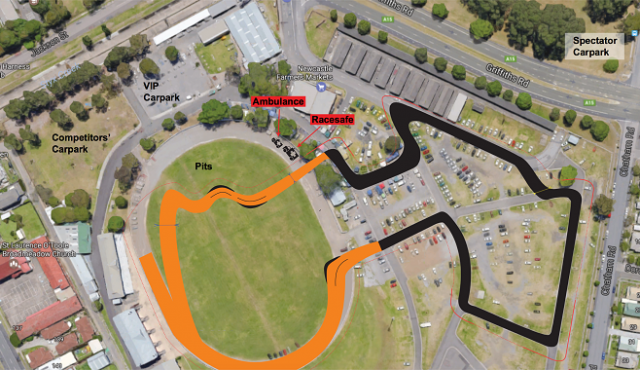 VIDEO: Highlights of the 2015 Newcastle SuperMoto in Newcastle East