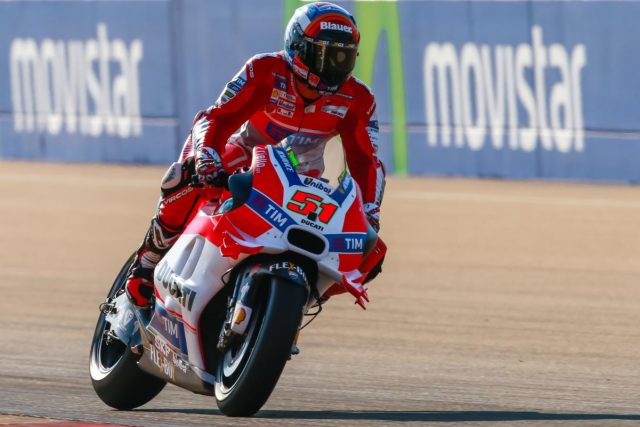 Pirro during his last round at Aragon in 2016

Michele Pirro will return to MotoGP as a wildcard rider for his and the Ducati Team’s home race at Mugello.

Pirro, a Ducati test rider, last started a grand prix motorcycle race at Aragon in September 2016 when then-Ducati factory rider Andrea Iannone withdrew after practice due to a pre-existing back injury.

The 30-year-old is currently racing in the Italian Superbike Championship, in which he is thus far undefeated in four races.

“Finally, I return to the track for a GP for the first time since Aragon last year,” said Pirro.

“I’m very happy because it’s always a fascinating experience to race at Mugello in front of our fans.

“As always, I’ll try and do my best together with the guys in the Test Team to put our bike as far forward as possible.

“We have a good base and I am ready to try and get a good result in the race.”

Pirro took part in nine MotoGP races in 2016 as either a wildcard or injury replacement, finishing in the points seven times with a best result of seventh in San Marino.

Pirro will join team-mates Jorge Lorenzo, who has won five of the last six Italian grands prix, and Andrea Dovizioso for Round 6 of the championship on June 2-4.