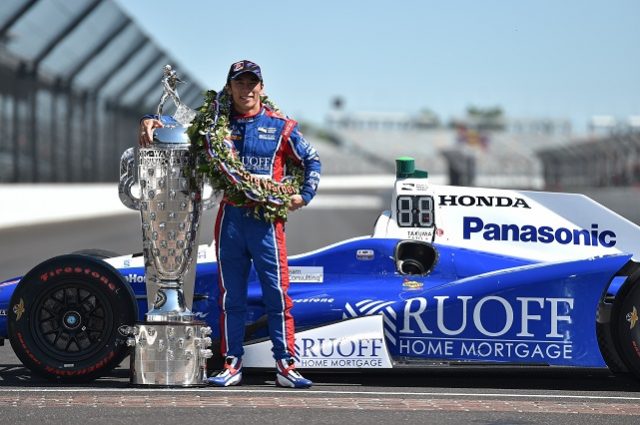 Takuma Sato’s victory in the 101st Running of the Indianapolis 500 was widely viewed as popular and deserved.

Sato already resonated with fans thanks to his “No attack, no chance!” spirit that saw him spin out and crash on the last lap trying to pass Dario Franchitti – another Indy legend – for the win at Indy in 2012.

So it wasn’t a surprise when the 300,000-strong crowd lining the famous 2.5-mile Indianapolis oval cheered when Sato passed Castroneves for the lead with five laps to go, and again when the Andretti Autosport Honda fended off the Team Penske Chevrolet a couple of laps later.

Taku-san wasn’t just an anonymous Japanese driver – he was a known quantity with a history of Indianapolis heartbreak.

While many were pulling for Castroneves to claim a historic fourth Indy win, a significant number of others would have tried to put an asterisk on it, believing that Paul Tracy was the rightful winner of the 2002 race credited to Helio.

That’s why the roars from the grandstands in the closing laps celebrating Sato’s achievement drowned out the sound of the turbocharged race cars.

A day later, the magnitude of his feat was still soaking in on the soft-spoken man from Tokyo who now lives in greater Indianapolis.

“I couldn’t picture myself winning, but always winning is our aim,” Sato told reporters the morning after his historic triumph.

“So obviously when we race here, the only reason is go for the win, of course.

“But when things happen, it’s just like Tony Kanaan said: The track chooses you.

“I think the #26 car deserved to be chosen yesterday because everybody worked so hard.”

There’s no question that looking at the race as a whole, Sato deserved to win.

He qualified fourth fastest and only dropped out of the top 10 once, when a crew member dropped a lug nut during a pit stop.

His moves down the stretch were decisive and clean and he performed all month on a level with his more experienced or celebrated teammates Ryan Hunter-Reay and Fernando Alonso.

With pole-sitter Scott Dixon taken out in a spectacular accident and Hunter-Reay and Alonso suffering engine failures in the final 50 laps, Sato did a perfect job of maintaining honour for Honda and the Andretti team.

Now he’s an Indianapolis 500 winner, with all of the accolades and responsibilities that go with it.

Sato and his team will receive a prize of around $2.5million US ($3.4million AUD) and his face will be etched onto the most famous trophy in American sports – the 1.7-metre tall Borg-Warner Trophy.

He will also spend the next year – the rest of his life, really – talking about what it means to be included in the select group of Indianapolis 500 winners.

“It’s no secret that I was aiming for Formula 1,” Sato remarked.

“When I got to Europe and go through the Formula 1 project (racing for the Jordan, BAR-Honda and Super Aguri teams), that was obviously an awesome time over there.

“But at the back of the mind always ringing the bell, the Indy 500 was something I really wanted to try all the time.

“It was nice to see everyone really cheering on me and congratulating me yesterday, including a lot of team owners.

“AJ Foyt came to the window, and that is very nice.

“I feel very, very lucky. I feel really, really appreciated, with all the support from them.”

Castroneves and Franchitti were some of the many to offer congratulations to Sato.

“He has a lot of misses, but when he gets it, he gets it, and not only in qualifying and racing.

“Today was his day and he did a great job.

“I’m glad he’s over the hump, showing old guys like us still can win races and be competitive.”