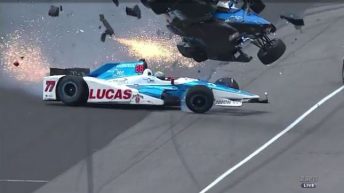 Pole winner Scott Dixon survived a terrifying accident on the 53rd lap of the Indianapolis 500 that caused the race to be red-flagged for 21 minutes.

His slowing car veered directly into the path of Dixon, whose #9 Chip Ganassi Racing Honda was launched into a crazy aerial flight, spinning like a top until it landed cockpit-first on the SAFER Barrier lining the inside of the corner.

Meanwhile, Helio Castroneves had to drive underneath Dixon as he drove through the crash scene.

When car #9 came to a stop, Dixon was able to clamber out under his own power, and he was quickly given medical clearance by IndyCar doctors. 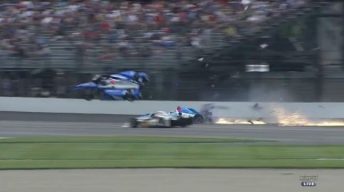 “I’m a little beaten up and it was definitely a rough ride,” Dixon said in a television interview.

“I was hoping that Jay was going to stay against the wall but obviously after the impact he turned down.

“I had already picked that way to go and there was nowhere else to try to avoid him.

“It’s a wild ride and you just hold on and believe in all the safety progress we’ve had over the last many years. 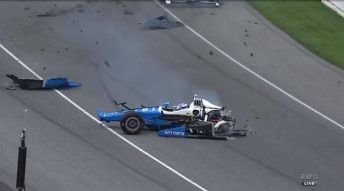 “Big thanks to Dallara and everybody for the safety standards we have now.”

Howard, who was running seven laps down after running out of fuel earlier in the race, tried to pin the blame on Andretti Autosport star Ryan Hunter-Reay.

Hunter-Reay appeared to catch Howard by surprise with an aggressive pass into Turn 1, causing Howard’s car to drift into the slick high line before it ultimately struck the wall at reduced speed.

Howard was unable to steer his car until the moment Dixon slammed into him.

“I’m really glad Scott is okay as he is a victim of this,” Howard said.

“We were a couple laps down and we were out there just trying to pick up some laps and see if we could get some yellows to maybe salvage something from the race.

“Hunter-Reay got a run on me and I tried to lift, being a nice guy, and he moves right over on me and puts me out in the gray on the marbles.

“The rest is history and it causes a massive accident.

“To say I’m unhappy is an understatement.”

Dixon, the pole winner, was classified with a 32nd place finish while Howard wound up 33rd and last.

Dixon had dropped to seventh place late in the first stint as he battled oversteer, but was confident about his chances over the remaining three-quarters of the contest.

“We got a little loose in the first stint but they dialed it in there and we were starting to make some progress,” Dixon said.

“Just glad everybody is okay because it was definitely a wild ride, for sure.”

VIDEO: Replay of the incident