Alonso proves himself despite engine failure

Alonso proves himself despite engine failure 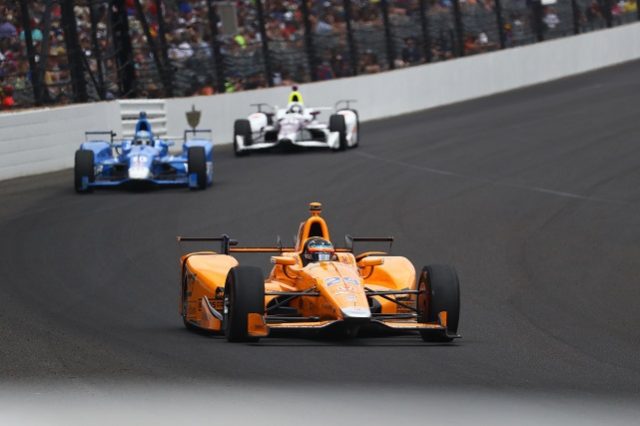 Fernando Alonso has reflected positively on a competitive showing in his Indianapolis 500 debut, despite engine failure bringing about a premature and frustrating end to his day.

The moonlighting Formula 1 star led 27 laps and mixed it with season IndyCar stars in his series debut before he was eliminated by one of the three Honda engine failures on the day.

The Indianapolis Motor Speedway crowd of around 300,000 gave Alonso a standing ovation when he climbed from his smoking #29 Dallara-Honda prepared by Andretti Autosport.

“It was a great experience, the last two weeks,” Alonso told reporters after the race.

“I came here basically to prove myself, to challenge myself.

“It was nice to have this competitive feeling, even leading the Indy 500, you know. Alonso trudges back to the pits after his engine failure

“I was watching the tower, saw the ‘29’ on top of it, and I was thinking at that moment if Zak (Brown, McLaren Technology Group CEO) or someone from the team was taking a picture, because I want that picture at home.

“Thanks to IndyCar for the amazing experience, thanks to Indianapolis, and thanks to the fans; I felt at home.

“I’m not American, but I felt really proud to race here.”

Alonso mastered every challenge that was thrown at him in his first oval race.

He handled pit stops, restarts, and passing other cars like a canny veteran.

In short, he lived up to his reputation as one of the best race car drivers in the world.

“Obviously there were some better moments than others on the race, but I felt competitive all through the race.

“Even with some unlucky moments of the yellow flags, we were in the group, in the mix.

“I think I had a little bit in the pocket before the engine blew up.”

Brown, the American marketing expert who took over as the McLaren Honda F1 team principal this year, was delighted by Alonso’s performance and the impact that his decision to run Indianapolis in lieu of the Monaco Grand Prix made around the world.

“If we reflect back on the past month, it was outstanding, putting aside the last 20 laps, which is a massive disappointment,” Brown remarked.

“Fernando didn’t put a wheel wrong and showed what a world class world champion he is today.

“He did an outstanding job, as did everyone at McLaren.

“(I’m) Just very disappointed for Fernando and everyone at McLaren to see him driving down the front straight with smoke coming out of the back of the car.

“I think we’ll look back on the month and feel very happy with what we achieved.”