David Wall and Shane Smollen have combined to take overall honours at the Carrera Cup Pro-Am, while Dean Grant and Lee Holdsworth took the Race #2 win in an event mixed-up by rain.

With showers just prior to the start only Rob Woods actually went to the starting grid on wet tyres; Grant and Daniel Gaunt coming to the pitlane after the warm-up lap and effectively starting off the rear.

Pole-sitter Dylan Thomas stalled and was clipped by Adam Gowans; both cars hopes ending on the spot.

By just the second lap Gaunt had made his way into the lead and quickly pulled a gap while the majority of the field struggled in the wet conditions. As they pitted, the three cars which started on the wet Michelin rubber put a lap on the field.

Gaunt appeared to be in the box before a safety car for Adam Gilbertson who crashed against the pit side wall after contact with Tim Miles.

With a driver change under green flag conditions required under the rules, the top three appeared to have the race in their hands. However, conditions improved and they remained on the wet tyres.

Sam Shahin, who took over from Gaunt, tumbled back down the field. Holdsworth took over from Grant, but was also on wet tyres, but he kept his head down to protect his lead. 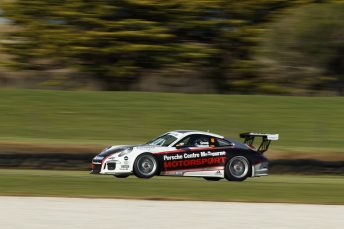 Alex Davison was the man on a charge, driving around Holdsworth and going about pulling a full lap back.

He got to within six-seconds at the end as Holdsworth held on to take the race win.

Duvashen Padayachee, who replaced Woods appeared headed for third, but he was passed on the final corner by both Andre Heimgartner and Wall.

For Wall it was his first over round win, while Smollen again proved his strength as a leading amateur driver in Carrera Cup.

The results have closed-up the championship chase with Heimgartner leading Wall by just 10 points, with Nick McBride back in third.

The mixed results in the Tag Heuer Carrera Challenge meant that the top three all finished on the same points. However, the trophy went to Grant, ahead points leader Stephen Grove and Shahin.

The Carrera Cup next races as part of the Supercars event at Darwin’s Hidden Valley Raceway on June 16-18.