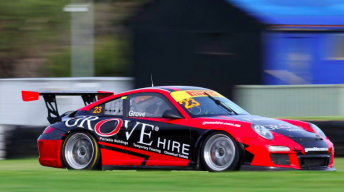 Jordan Love has won Round 2 of the Porsche GT3 Cup Challenge at Phillip Island, despite running off and hitting the wall in Race 2.

Brenton Grove won that encounter while Love hit back in Race 3.

In Race 2, Grove was challenged by Love off the start, the latter hanging on the outside through the opening corners before taking the lead exiting the Turn 4 Hairpin.

However, with the track still damp after overnight rain, Love slipped off just as he got to the front and slid up to the wall at Siberia.

Anthony Gilbertson then closed up on Grove, but he too made an unforced error in spinning at the Turn 4 Hairpin on Lap 2.

That left Grove with a four second lead and he was untroubled to the finish.

Love, however, set about on a monumental comeback, lapping four seconds per lap quicker than anyone else at times as he stormed from second-last (15th) to finish second, with Brett Boulton third.

The ex-Formula 4 driver might have even reclaimed the lead had the race not been shortened by three laps due to time-certainty.

Gilbertson’s race ended in the wall at the exit of MG after another error.

Grove won the start in Race 3 but Love got past at MG before the opening lap was out and was untouchable thereafter, winning by over 15s in just 11 laps.

Love, who also won Race 1 the day prior, thus takes over the series lead heading to Round 3 at Winton from June 9-11. 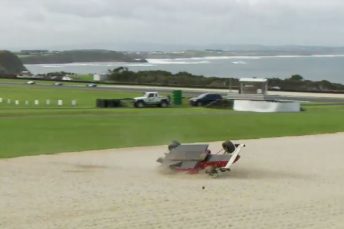 Simon Fallon made it three different race winners in Round 4 of the CAMS Jayco Australian Formula 4 Championship after Liam Lawson was stripped of victory.

Race 1 winner Ryan Suhle shared the front row with Josh Denton and while the latter led the opening lap, the former slipstreamed past as Lap 2 began.

Lawson got past Denton at MG on Lap 2 and soon took the lead off Suhle, but would be found post-race to have done so after the Safety Car had been called.

That intervention came on Lap 4 after Aaron Love ran off at Doohan Corner and spun into the side of Sage Murdoch as he slid back onto the circuit, causing Murdoch to run into the gravel and roll over.

Murdoch was seen to be standing at the scene of the incident after marshals had turned his car back to an upright position.

Rain began to fall as the field trundled around, before a two-lap dash to the flag on slicks.

Lawson handled the conditions admirably, crossing the line 6.9s ahead of the rest, while Fallon moved up to second.

However, the New Zealander was later slapped with a 30s penalty which relegated him to seventh and handed the win to Fallon, ahead of Suhle and Cameron Shields.

Fallon thus beat Suhle to the round win on a countback.

Nick Rowe leads the championship by a single point over Lawson ahead of Round 5 at the Ipswich Super Sprint from July 28-30. 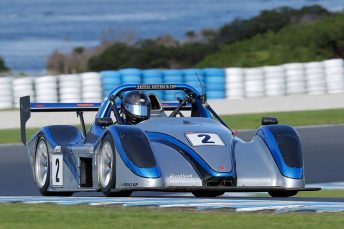 Paddon moved right in an attempt to pass the front row at the rolling start, but stepped onto the wet grass and slid into the fence, ending his race almost before it had even started.

Shaw dominated thereafter, headed only during the pit stop cycle as he won by 17s after 27 laps.

Round 4 will be held at Sydney Motorsport Park from July 8-9.