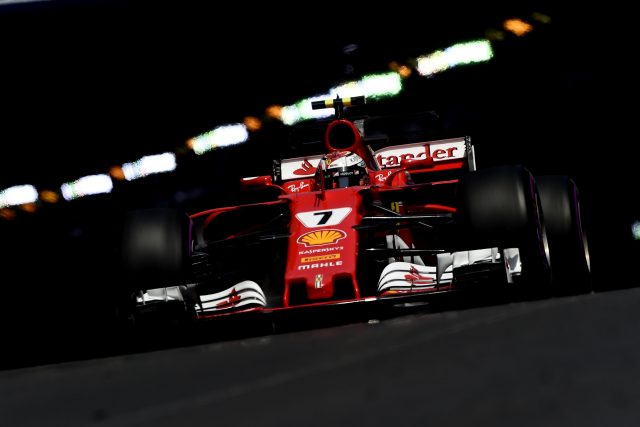 The Ferrari driver produced a committed lap around Monte Carlo’s unforgiving streets to land his first pole position since the French Grand Prix in 2008.

Raikkonen made his mark in the middle sector as he lit up the timing screens by posting a 1:12.178s effort.

“Obviously it is the best place to start for tomorrow but it doesn’t guarantee anything,” said Raikkonen.

“I will take it. I was very happy with the car.”

Sebastien Vettel completed a Ferrari front row lock out with the championship leader 0.043s adrift of his opposite number.

Mercedes Valtteri Bottas was third fastest although his team-mate Lewis Hamilton will start from only 13th on the grid after failing to progress from Q2.

The Mercedes driver struggled for pace during the second segment of qualifying.

His final effort to climb out of the drop zone was ruined when McLaren’s Stoffel Vandoorne clouted the wall at the Swimming Pool, bringing out the yellow flags.

A late effort from Red Bull’s Max Verstappen saw the Dutch teenager claim fourth ahead of Australia’s Daniel Ricciardo, who was 0.820s adrift of Raikkonen.

The Frenchman began qualifying with a lurid spin at Mirabeau in Q1.

He managed to recover from the moment to progress to Q2 with a last gasp effort in the first segment of qualifying.

McLaren returnee Jenson Button and team-mate Vandoorne qualified ninth and 10th but will start lower down the field on Sunday.

Button will start from the back of the grid after incurring a15 pace grid drop for an MGU-H change.

Vandoorne will start 12th due to a penalty which as a result promoted Toro Rosso’s Daniil Kvyat to ninth ahead of Renault’s Nico Huldenberg to 10th and Kevin Magnussen (Haas F1).

Force India’s Esteban Ocon will start from 15th position behind Felipe Massa, as a result of the penalties, despite falling shy of Q2.

He was joined in the Q1 drop zone by Renault’s Jolyon Palmer, Lance Stroll (Williams), Pascal Wehrlein (Sauber) and his team-mate Marcus Ericsson, who broke his left rear wheel after clipping the inside barriers at the chicane.