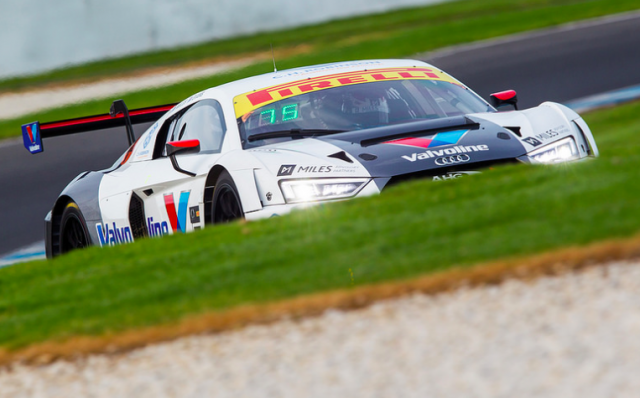 Jaxon Evans and Tim Miles produced a faultless drive in challenging wet conditions to win the opening round of the Australian Endurance Championship at Phillip Island.

The #75 Jamec Pem Racing Audi duo kept their cool in treacherous conditions to see off the pole-sitting Eggleston Motorsport Mercedes of Dominic Storey and Peter Hackett, who fought back from going a lap down.

The final place on the podium was filled by the Fraser Ross/Warren Luff McElrea McLaren 650S.

The pole-sitting Eggleston Mercedes lost out to the Walkinshaw Porsche of Liam Talbot and John Martin as the field streamed into Turn 1.

Talbot set a strong pace for the outset with Hackett in tow as the pair broke away from the field.

It wasn’t long before the race had its first incident of contact when James Bergmuller in the BMW Team SRM M6 GT3 was hit by the KFC-backed Matthew Stoupas,

The impact forced Bergmuller into the pits with damage to left rear. He returned several laps down after a lengthy repair.

The big mover in the first stint was Ross in the McElrea McLaren as he climbed to fourth from 16th on the grid.

Meanwhile, the lead changed hands on lap 22 when Talbot allowed Hackett through at the Honda Hairpin before the race was turned on its head by the weather.

A heavy rain shower doused the circuit forcing the majority of the field to dive into the pit lane, outside of the pit window, to change to wets.

The weather forced the introduction of the first of four Safety Cars.

Chaos ensued with the amount of traffic in pit lane resulting in several cars including leader Hackett to remain stuck behind stacked traffic.

The entire field apart from Talbot, Stoupas (#14 Audi), and Tim Miles (#75 Audi) were the only cars who pitted to not lose a lap in the pit lane traffic jam.

Teams elected against putting in their professional drivers while Max Twigg in the STM Mercedes chose not to pit and emerged in the lead with a lap advantage.

Twigg eked his slick tyres out until the compulsory stop windows opened and made his first stop dropping him to 12th spot.

Once the first stops were completed, Talbot passed Stoupas and Miles for the lead, with Hackett fighting back to within 70 seconds of the lead in fourth.

The field hampered by the pit lane traffic jam were given a reprieve when the Safety Car was deployed on lap 48 after Stoupas became stranded at Lukey Heights.

It played right into the hands of the pole-sitters, allowing Hackett to catch up to the lead group as rain began to fall once again.

As racing resumed, Talbot, Hackett and Geoff Emery in the #74 Audi made their first compulsory pit stops just as the Safety Car was called again, with Stoupas stranded again in the gravel trap.

This gave the trio a free kick on the field as they completed one of their mandatory two compulsory pit stops and driver change.

Having taken over the Porsche, Martin rejoined in fourth and circuited for handful of last before diving in for a second and final compulsory stop.

The quartet still had to make their second compulsory stop.

However, the Walkinshaw Porsche’s victory hopes faded when they had to dive into the pits again to redo a compulsory pit stop.

The squad’s first stop was too short following the failure of the car’s electronic timing monitor on the windscreen of the 911 GT3 R.

This demoted the squad to seventh as Storey conducted his second compulsory stop that saw him rejoin in third 40s behind the Griffith/Camilleri Mercedes and the Miles/Evans Audi.

The race was turned on its head once again when a fourth Safety Car was introduced after Brad Shiels found the gravel on lap 80.

It proved a bonus for Storey as he closed right up onto the leader Evans, who had profited from a 79 second compulsory pit stop time.

The latter was able to to comfortably hold on to take the win from the Mercedes, with the McElrea McLaren of Ross and Luff third.

A fighting final stint from Tander saw him bring the #74 Audi, which he shared with Emery, to fourth, ahead of the Jake Camilleri/Mark Griffith Mercedes and Talbot/Martin (Walkinshaw Porsche).