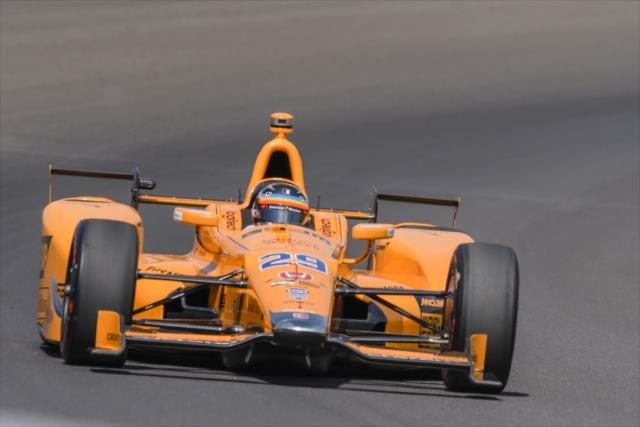 Fernando Alonso has captivated fans, charmed the media and challenged his Verizon IndyCar Series competitors in the lead up to the 101st running of the Indianapolis 500.

The 35-year old Spaniard demonstrated why he is a two-time Formula 1 world champion by immediately running on the pace in his IndyCar and oval track debut.

Alonso completed nearly 500 practice laps of the Indianapolis Motor Speedway, from running in packs to simulate racing conditions to trimming the downforce out of the car for high-speed single car qualifying runs. 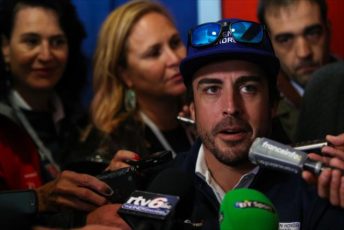 Alonso during the Media Day

A large multi-national media throng is shadowing Alonso’s every move, whether he is driving on the track or signing autographs for school children.

The international superstar’s presence has given this year’s Indy 500 a big lift despite his relative anonymity up to now in America.

“It’s the most positive thing that happened this year,” Indianapolis 500 winner and IndyCar Series champion Tony Kanaan told Speedcafe.com in an exclusive interview.

“He’s a very talented guy with a lot of following in Europe and I think we made IndyCar better, bigger, and more well-known.

“If you’re thinking about the big picture, we just grew IndyCar a lot more and it’s an honour to have somebody of that calibre, willing to miss one of the best races in that series to come here.”

Tim Cindric, President of Team Penske, is one of many in the IndyCar community who have welcomed Alonso with open arms. 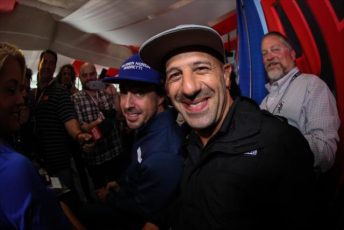 Cindric, who manages Penske’s five-car Indianapolis 500 attack in addition to overseeing the legendary team’s activities in NASCAR and the Virgin Australia Supercars Championship, is not surprised by how quickly Alonso has adapted to IndyCar.

“Once you get used to the speed, I think the environment is somewhat similar for an open-wheel guy to come here,” Cindric remarked to Speedcafe.com.

“I’d say it was probably more difficult for a NASCAR stock car driver to come here and drive one of these cars.”

Cindric believes that while Alonso has aced every test so far, things get exponentially more difficult in the race.

“What he’s seen in these practice sessions is a lot different from the race,” Cindric said.

“Everyone is a lot more courteous, everybody’s a lot more forgiving – maybe too forgiving because they all want to drop to the back of the line to practice drafting. 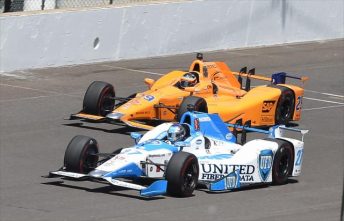 “In the race, you have to get used to getting cut off a few more times and that will wake you up.

“The first hundred laps will dictate mentally how he approaches the rest of the race.”

Alonso acknowledges that this will be the longest race he has ever run, with a distance more than 2.5 times that of a Formula 1 Grand Prix.

He has benefited from tutelage from former IndyCar and Indy 500 champion Gil de Ferran and sought out advice from three generations of the Andretti family.

On most practice days, Alonso spent two hours in a Honda simulator in addition to his time on track, trying to anticipate any scenario that might come up on race day.

“Hopefully I deal with restarts, with pit stops, with group running and different things that will be new to me, and execute it well,” Alonso told Speedcafe.com.

“But it’s one thing to prepare and feel ready to do it and a different thing to execute it well.

“I need to focus more and keep calm in some frustrating moments that I know will happen during the race.

“The race is very long, and I have never done such a distance race, so it’s another thing to learn.” 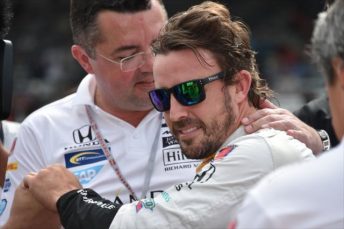 Alonso after his qualifying run

After enduring a difficult stretch of his career in uncompetitive Ferrari and McLaren-Honda F1 cars, Alonso is enjoying his new (if temporary) lease on life at the Indianapolis 500.

He’s handled much heavier demands from fans and media with grace, and says he’ll go back to F1 a happy man regardless of what kind of result he achieves in his IndyCar debut.

“This is a race where there are chances for many, many drivers, even the guys starting 25th or 27th,” Alonso said.

“Maybe they will lead the race at one point.

“That is the best thing about this race – there is no plan, there is not something defined before the start.

“This unpredictable race will make the show better.

“If everything goes well and you have no big issues, it will be a pleasure to be there,” he added.

“The race will feel short, because you love when you are in a racing car driving.

“Obviously if things do not go to not according plan and you are not competitive, the race will feel very long.

“Hopefully that’s not the case.”