Porsche Carrera Cup organisers believes the introduction of a new class structure which limit the number of professional drivers alongside a new Carrera Cup car will revitalise the category next year.

From next season the one-make Porsche series will impose a limit of 10 professional drivers while trying to encourage a rise in amateur competitors as it targets a 24 car grid.

Announced at the Australian launch of the new improved Carrera Cup car, the Elite Class will be split into Pro/Am and Am classes, which will both have exclusive access to ABS on their cars.

The changes have arrived after a difficult 2017 campaign where the category has struggled for grid density.

This year Carrera Cup has accrued an average grid of 14.5 while its once booming Amateur ranks has dwindled to an average of five competitors over the first three rounds of the series.

Coupled with the arrival of a faster Carrera Cup Car, Porsche Cars Australia Director of Public Relations and Motorsport, Paul Ellis believes the radical changes will rejuvenate the category.

Ellis feels an older generation car has contributed to the downfall in amateur drivers this year.

“Confident, yes. Arrogantly so, no. We’ve still got to sell them,” said Ellis, when asked if he believes the category will attract a 24 car grid next year.

“You never can tell. Talk is cheap. Out of all the people that tell you they want to go motor racing, one in 100 actually does. 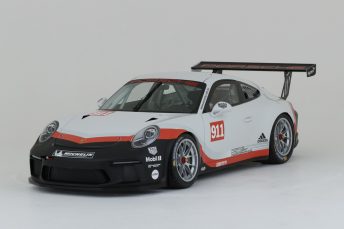 The new Carrera Cup car which will be introduced in 2018

“This is customer motorsport, and the backbone of Carrera Cup racing is customers that don’t necessarily want a career in motorsport, but want to have good, top-level motorsport.

“That’s what Carrera Cup is all about.

“The pros will come and go, the pros will use Carrera Cup as a stepping stone to further their career.

“But the semi-professional drivers will be the backbone of Carrera Cup, they’ll stay one year, two years, three years.

“We’ve built everything around them, so we need to have a maximum number of those types of customers. We need to make sure the numbers are right.

“It’s also about giving the customers what they need. If you want to sell something to a customer, you have to be selling what they want – not what you think they want.

“You have to know what the customer wants. And these customers want ABS.

“We’re listening to the customers.”

While the category has shifted its focus to attracting amateur drivers, Ellis says the Carrera Cup will remain a valuable step for aspiring professional drivers.

The championship has been put on the world stage courtesy of last year’s champion Matt Campbell, who has since earned a spot on the Supercup grid.

“Matt is the poster boy of the Porsche motorsport pyramid. He’s a young kid who’s come in at an affordable level,” Ellis added.

“He came into the GT3 Cup Challenge, not in the fastest car, one of the older cars.

“Got the opportunity to show his talent to Porsche’s best talent spotters, won that contest. And now he’s racing at Monaco this weekend.

“That worked for Matty. Will it ever happen again? I don’t know. But it’s vindication of how Carrera Cup can work for a young professional driver.”