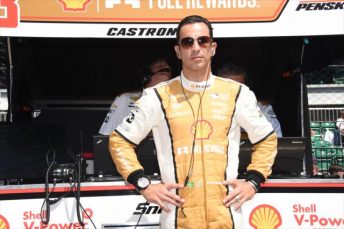 The final ‘Carb Day’ practice session for the 101st running of the Indianapolis 500 ended with Helio Castroneves and Chevrolet on top of the timing screens.

Honda-powered entries filled eight of the top 10 places on the speed chart, but none could top Castroneves’ 227.377mph (365.928km/h) tour of the Indianapolis Motor Speedway in his Team Penske machine.

Fernando Alonso continued to show he could be a threat to win on race day, reaching 226.608mph (364.690km/h) in his Andretti Autosport Honda, good for fifth fastest.

“It was a very smooth practice,” Alonso said to Speedcafe.com.

“I think the car felt the best so far from the last two weeks.

“I was trying moves on different lines that I saw on videos from different years.

But it wasn’t all smiles for Honda because James Hinchcliffe became the marque’s latest driver to lose an engine.

It was the seventh documented Honda failure since the IndyCar Series arrived in Indianapolis on May 12.

“Obviously we’ve been having some issues in the Honda camp and this is less than ideal,” admitted Hinchcliffe.

“I’m just happy it didn’t happen 20 minutes later because that would have been Lap 5 of the 500.

“The good news is the car is the best it’s been all month, especially in traffic.

“We expect to be fast on race day and it should be all good.”

Despite qualifying a career-low 19th for the Indianapolis 500, Castroneves expects that he and the other Chevrolet runners will be more competitive on race day than they have shown so far at Indianapolis.

“Our goal is pretty much the same even though qualifying didn’t work out the way we wanted it,” Castroneves told Speedcafe.com.

“We’re going to fight extremely hard out there to show some speed.

“We have to pay attention to the people surrounding us, control everything on our own and if somebody makes a mistake, try not be a part of it.

“Being patient is another important thing at this place,” he added.

“You don’t want to rush things because it’s a long race.

“We have a good balance in the car and we’ll go for the big one on Sunday.”