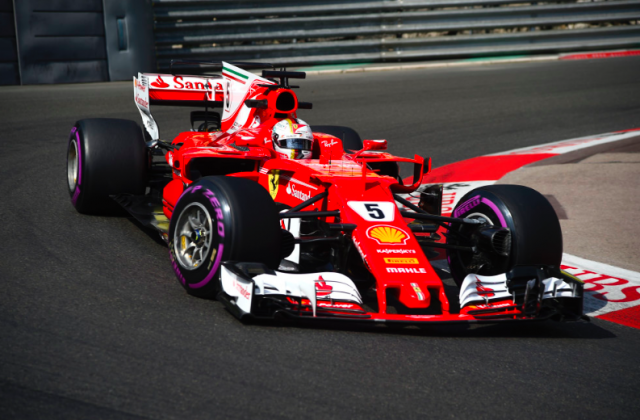 Sebastian Vettel set the pace in Thursday practice ahead of this weekend’s Formula 1 Monaco Grand Prix.

Vettel clocked the fastest ever lap in Monte Carlo with a 1:12.720s to finish 0.487s clear of Red Bull’s Daniel Ricciardo.

Red Bull displayed a visible upgrade to its RB13 with the addition of the T-wing on the engine cover of both its cars.

Ricciardo managed to split the Ferraris with Kimi Raikkonen third fastest, just over half-a-second off the pace, with Toro Rosso’s Daniil Kvyat half a tenth further back in fourth.

Hamilton and Bottas had clocked times for first and fourth respectively in the opening 90 minute practice session, before a set-up change saw the pair unable to match their earlier pace.

The Williams driver, who was 16th fastest, lost the rear at the top of the hill before sliding into the barrier.

Second practice was a scrappier session than the morning overall, with Esteban Ocon hitting the barrier at the downhill right-hander before Portier.

Sauber’s Marcus Ericsson, who failed to complete a lap time in first practice because of a gearbox problem, nudged the barrier at Casino Square, forcing him to pit.

There was more frustration for Renault, with Nico Hulkenberg ending the session 17th quickest, having failed to set a time at all due to mechanical problems in the morning.

His team-mate Jolyon Palmer pulled off track at Portier early in the session with smoke pouring from the rear of his Renault. He completed just eight laps.