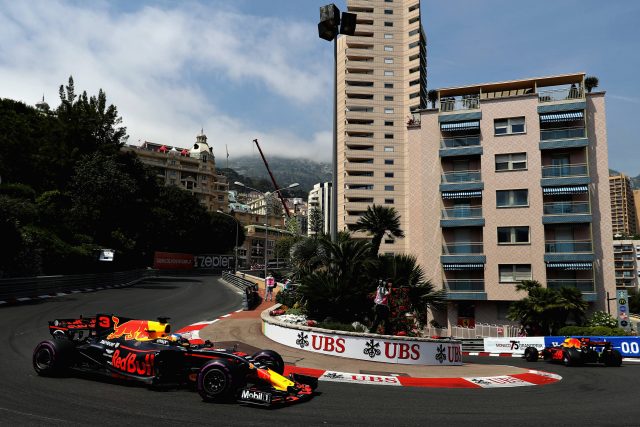 Daniel Ricciardo is confident Red Bull can join Mercedes and Ferrari in a three-way fight for pole position in Monaco following a promising performance in Thursday practice.

Red Bull has trailed Ferrari and Mercedes so far this season and has played down its chances of recapturing its 2016 form.

However, the Australian finished second quickest in second practice behind the Ferrari of Sebastian Vettel, while Mercedes drivers Lewis Hamilton and Valtteri Bottas struggled for pace in eighth and 10th respectively.

Ricciardo joined Vettel in admitting that Mercedes’ pace was perplexing, but he is expecting all three teams to be in the fight on Saturday.

“Obviously this morning they looked strong, particularly Lewis, and then this afternoon it kinda looked like they put more fuel in the car or something.

“We’ll see. If that’s genuine then it reminds me a little bit of Singapore 2015.

“If that’s the case, beauty, but I expect them to be (OK). If we all get it together on Saturday it should be a three-way fight.

“There’s a few little things that I definitely want to work on, but generally we are in that window where we need to be and not a second off or anything, so that’s promising.”

Qualifying for the Monaco Grand Prix is scheduled for Saturday at 2200 AEST.

Next Story Button: Tough to find my feet on F1 return