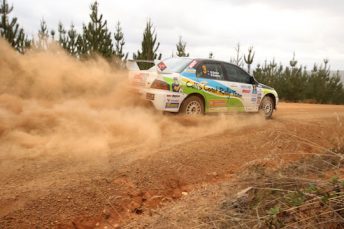 Nathan Quinn during the Forest Rally

Australian Rally Championship leader Nathan Quinn expects that he will take a conservative approach to this weekend’s National Capital Rally.

Quinn tops the points standings having finished second in each of the two rounds of the year to date in Ballarat and Western Australia’s Forest Rally.

The Coffs Coast Rally Team driver had battled with Harry Bates in Leg 1 in Ballarat before mechanical problems hampered his afternoon, and was edged by Eli Evans on the following day.

Quinn’s Mitsubishi Lancer Evo suffered power problems on both full days of running in WA, but still finished both heats in second position.

However, with his nearest rivals all suffering issues of their own, Quinn leads the championship by six points to Taylor.

As a result, he says that he will take a conservative approach to the National Capital Rally, which marks the halfway point of the five-round Australian Rally Championship.

“I didn’t think that leading the championship would change the approach but it kind of has,” said Quinn.

“We went to Ballarat wanting to be quickest and we were very close to that.

“In WA, we weren’t quickest and while personally it was an unsatisfying weekend, the consistency paid off and I know that I should be grateful for how it turned out.

“Going to the National Capital Rally we probably do have to think about protecting that championship lead and being a bit consistent.

“It is exciting and it would be nice to stay in the lead after this round but realistically I would be happy to be sitting in the top three.”

Defending champion Taylor won both heats in WA in her Subaru Impreza STi and maintains that the closeness of competition requires drivers to still push hard.

In the West, for example, Heat 1 saw four different stage winners and a run of five stages where the rally lead changed each time.

“Consistency is really important in a championship, we proved that last year; it was something that we were conscious of and it paid off for us,” said Taylor.

“But between Harry (Bates), Eli (Evans), Nathan (Quinn), and Brad (Markovic), the pace is pretty fast.

“If you relax at all you are going to be fifth so still need to push if you want to win.”

Bates, meanwhile, is wary of the roads which crew will face in Heat 2 of what is his home rally.

“The two days are completely different, almost like two totally different rallies in one, so that makes it difficult for finding the correct car set up,” explained the Toyota Corolla driver.

“The roads to the west of the city which will make up day two are probably the most narrow and twisty in the championship.”

The National Capital Rally, which forms Round 3 of ARC, Round 2 of the Asia Pacific Rally Championship, and rounds of the NSW Rally Championship and ACT Regional Rally Series, begins tonight with a ceremonial start in Burton before Heat 1 commences tomorrow morning.