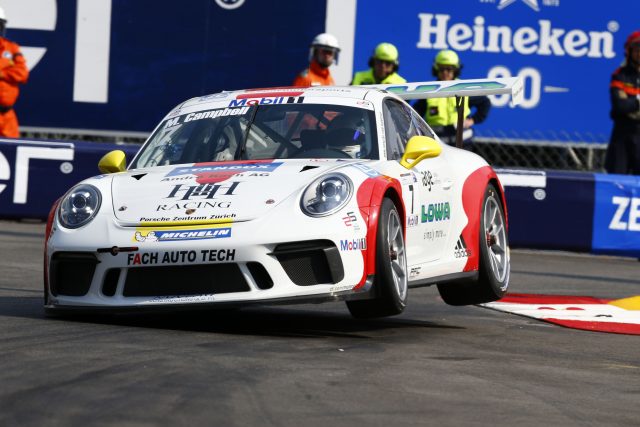 Matt Campbell through the swimming pool section in Monte Carlo

Australia’s Matt Campbell will start the Monaco Porsche Supercup race from fifth after being unable to get a clear lap around the twists and turns of Monte Carlo.

Michael Ammermüller took the pole ahead of Dennis Olsen, who like Campbell, is a Porsche Junior racer in the series.

With 28 drivers fighting for the best times, the qualifying session featured numerous yellow flags. Olsen set a quick time early, before the German nudged him from the top of the time sheets late in the session.

The 22-year-old Campbell from Warwick in Queensland was left somewhat disappointed despite this being his debut in the Principality.

“I encountered traffic on the track, plus I made a couple of very small mistakes,” said Campbell.

“Still, I can’t be too unhappy with fifth and I’m excited to see what the race on Sunday brings.”

The Porsche Mobil 1 Supercup celebrates a very special anniversary in Monaco: For the last 25 years, the one-make race series has been contested in Monaco as support to Formula 1. In 1993, Mika Häkkinen won the Porsche race in Monte Carlo as a VIP guest driver.

The race on Sunday gets underway at 1745 AEST.