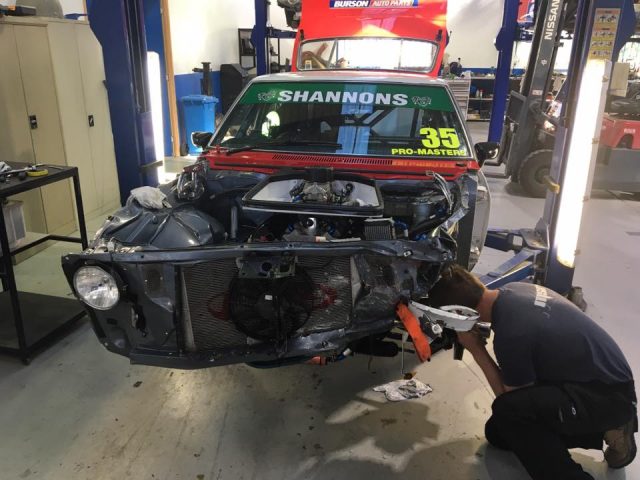 Matt Stone Racing faces a tight turnaround to fix Jason Gomersall’s Torana for Darwin after sustaining heavy damage in the multi-car crash which marred the Winton Touring Car Masters round.

While Gomsersall’s Torana is set to take the starting grid for Round 3 at Hidden Valley (June 16-18), Mark King’s Whiteline Racing team is in the preliminary stages of sourcing another car for the Northern Territory event after his Camaro was also badly damaged.

Todd Hazelwood works full time for MSR as well as driving one of its Dunlop Super2 Series entries, and has been heavily involved in the rebuild of the Peter Brock/Holden Dealer Team tribute-look Torana.

He confirmed to Speedcafe.com that repairs are ongoing at the team’s Yatala workshop.

“We’ve already got the whole front clip cut off and we’ve already sourced another new clip that we’re going to manufacture back onto it.

“There was a fair bit of work involved but we’ve got probably three or four guys working on it now, getting it ready for Darwin

“To be honest it’s still quite bad but it’s not as bad as what we originally thought, so there are a few positives to take out of it.

“We haven’t really touched the front end since we first built the car this time last year so out of all this we’ve actually been able to make some new developments on it and hopefully should make it even more competitive come the next round.”

While the front crossmember, steering rack, and radiator are among the damaged items, Hazelwood believes that the engine escaped damage and confirmed that the rest of the car from the firewall rearward was largely unscathed.

“The motor itself was fine,” he added.

“That’s been sent back to KRE, who look after our engines, to check over and make sure it’s all okay but it’s all being taken care of at this stage.”

Meanwhile, King’s Whiteline Camaro, which bore the brunt of the damage in the seven-car crash, has provisionally been ruled out of action for the trip to Darwin.

However, team director Sharon Middleton told Speedcafe.com that the team is in the early stages of trying to secure a temporary ride for King, who is series leader John Bowe’s nearest rival in the standings.

“It won’t be ready for Darwin; we don’t think so,” said Middleton.

“We do have some contingency plans in place to maybe source another car for Kingy for the Darwin round.

“He’s coming second in the championship so we need to do whatever we can to make sure he’s there.

“Everything (was damaged). The car is right back to a bare shell.

“The chassis will have to go on a rotisserie and have it all completely straightened and everything completely checked, basically like rebuilding another car.

“Everything that attaches to it needs to be sent away and crack tested and checked, and then all new bracketry has to be made by Birdie (Chief engineer Mark Peacock) to re-attach everything to the car.

“Of all the years of us doing motorsport, that’s the worst damage we’ve ever sustained in a race.”

Hazelwood and Middleton both confirmed that Gomersall and King escaped significant injury, but Bowe was not so lucky in sustaining three broken ribs.

Bernie Stack, who was also caught up in the incident, was released from Wangaratta Base Hospital after undergoing preliminary checks due to back and neck soreness.

Gomersall set off the melee when he lost the rear of the Bigmate Torana as he led the field through the second corner of the race. 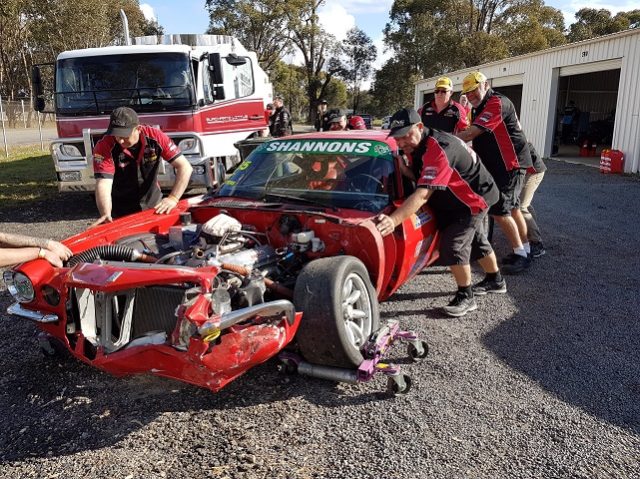 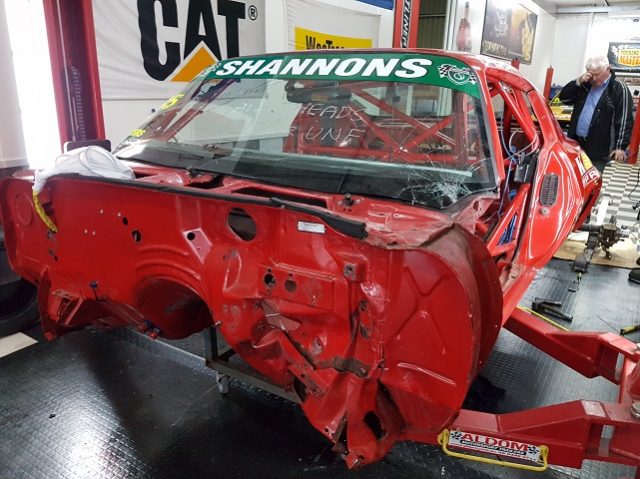