OREOVICZ: Five (other) drivers to watch at Indy

OREOVICZ: Five (other) drivers to watch at Indy 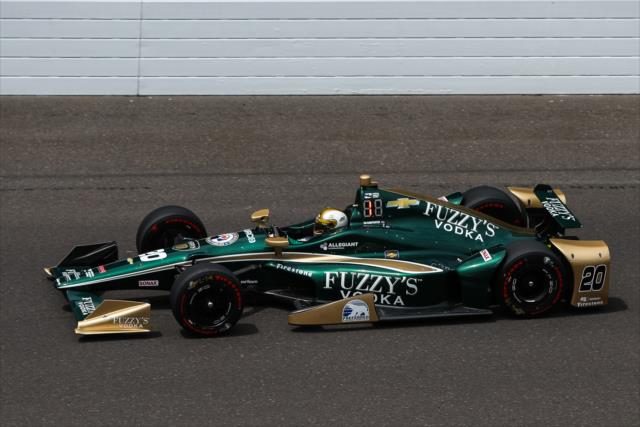 The worldwide spotlight is on Fernando Alonso and the American racing community is anxious to see if four-time Verizon IndyCar Series champion Scott Dixon can certify himself as a legend by converting pole position into a second Indianapolis 500 victory.

But they won’t be the only drivers vying for a US $2.5million ($3.3million AUD) prize when the green flag waves early Monday morning Australian time (Race start 0200 AEST; live on ESPN from 0100 AEST).

It’s a stretch to say that every one of the 33 starters has a shot at winning the 200-lap race.

Still, from the front of the field to the back, some drivers have a much greater chance of drinking the bottle of cold milk that awaits the Indy winner in Victory Lane.

Here are five drivers to watch other than Dixon and Alonso who should be interesting contenders to follow:

As an oval specialist who came up through the old-school ranks of midget and sprint car racing, Carpenter is a bit of a throwback.

He’s the adopted son of former Indianapolis Motor Speedway president Tony George and the blueprint for the kind of driver George wanted to showcase when he formed the Indy Racing League in the mid-90s.

The unified IndyCar Series that emerged when the 12-year battle for American open-wheel racing ended in 2008 soon began to feature more road races than ovals and looked a lot more like the old CART/Champ Car Series than the IRL.

Carpenter was the last of the IRL regulars to hang on, and he remains a formidable competitor on ovals, but last year he decided to step out of the #20 car for the road racing portion of the schedule, grooming young driver Spencer Pigot.

With his close ties to the Speedway, it’s no surprise that Carpenter is one of the very best at getting around the famous track.

He earned pole position for the Indianapolis 500 in 2013 and ’14 and was Dixon’s closest competition this year.

“The level of competition in this series from teams, drivers, engine manufacturers, it’s cut-throat, and you’ve got to be on it all the time,” Carpenter said.

“I’m proud of the effort from the whole team, to have the top two qualified Chevrolets, with a car in the first row a car in the second row.

“I’m in the middle of the front row with two former 500 champions, and hopefully I can convert from the front row this time and claim a 500-mile victory.” 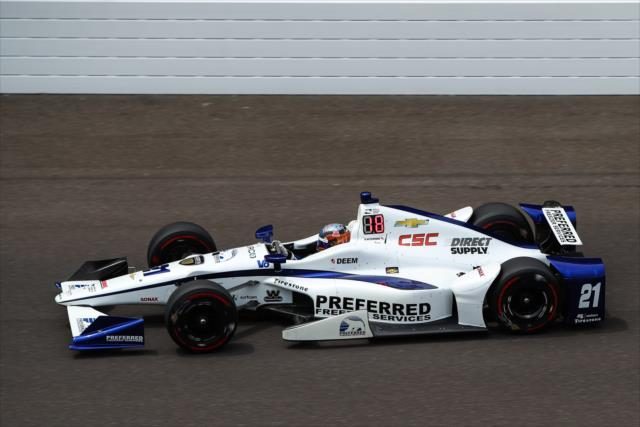 He’s the guy famous for crashing out of the lead in the last corner of the 2011 Indianapolis 500, handing an unlikely victory to the late Dan Wheldon.

Now JR Hildebrand is back with a full-time IndyCar Series ride for the first time since 2013, and he’s making the most of it.

When Josef Newgarden was recruited by Team Penske this year, Hildebrand was waiting in the wings to take his place.

The first few road races of the season didn’t produce the desired results, but Hildebrand was one of the few drivers who was able to pass at the Phoenix oval on the way to a third place finish.

He qualified his ECR Chevy a career best sixth and looks to gain redemption from that memorable second place finish at Indy in 2011.

“We could have been a spot or two better with a better fourth qualifying lap, but we’re starting on the outside of the second row and it’s a place I think we can compete and win the race from,” Hildebrand remarked.

“The statistics say qualifying doesn’t really matter, but it’s always nice to be up towards the front. 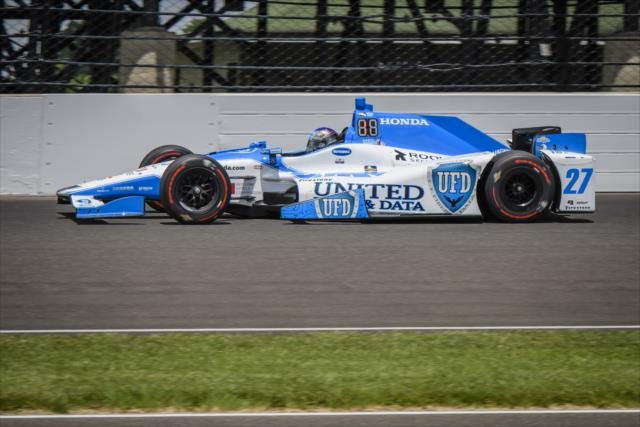 He’s American racing royalty, but the kind of success that his grandfather Mario and father Michael enjoyed has eluded Marco Andretti.

He’s won just two races in his 11-year IndyCar Series career and is the perennial subject of “Is this the year Marco breaks through?” speculation.

Still, he’s just 30 years old and is likely to have a secure job for life with his father’s successful Andretti Autosport team.

The 2017 season has got off to another slow start for Marco, but Indianapolis is his best track, with top-six finishes in more than half of his Indy starts, including a pair of seconds.

Last year, he was convinced that he would have won had his front tyres not been accidentally switched in the second half of the race.

An Indianapolis win would be the career breakthrough that Andretti – and the IndyCar Series – so desperately need.

“The second lap of my qualifying run will haunt me and obviously the front row would be nicer, but I am very happy with where we are starting,” Andretti told Speedcafe.com.

“The race will be a different scenario than qualifying but I think we have a strong car in the race situation and hopefully we can prove that.

“I wanted to be further up and go for the pole, but I’m really just focused on winning this race, and it’s been done from further back than eighth.” 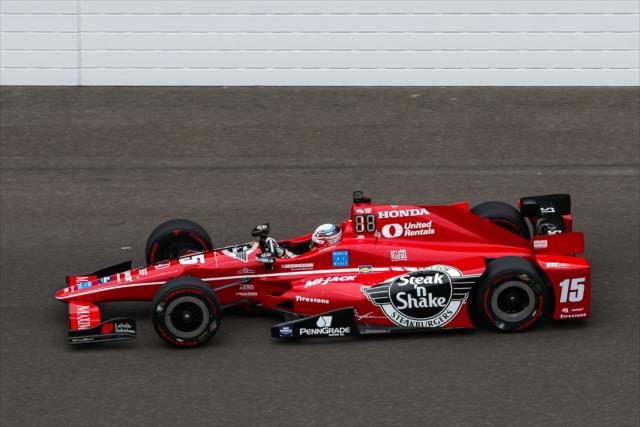 Rahal is another generational star whose career hasn’t progressed as successfully as he or IndyCar had hoped.

But in the last two years, the son of former Indy 500 winner and IndyCar champion Bobby Rahal has developed into one of the series’ most exciting performers.

Graham Rahal was the winning driver at the end of the closest and most hard-fought oval races in recent memory – at Fontana in 2015 and Texas last year.

In the process. he developed into Honda’s strongest championship contender – until this year, when the arrival of Ganassi Racing and Sebastien Bourdais into the Honda camp seemed to knock Rahal and the team co-owned by his father and retired television star David Letterman into the second tier.

The Rahal team endured a tough start to the season until Graham drove through the field to finish sixth after qualifying 20th in the series’ most recent race on the Indianapolis road course.

The Indianapolis oval has not been his best track, with just two finishes better than 12th in nine starts.

“I was sliding all over the place in qualifying and I’m glad that’s over,” Rahal said.

“Would I like to be better and keep improving it? Maybe a little bit but it’s hard to say.

“Now we can turn our full attention to the race and try to win this thing.” 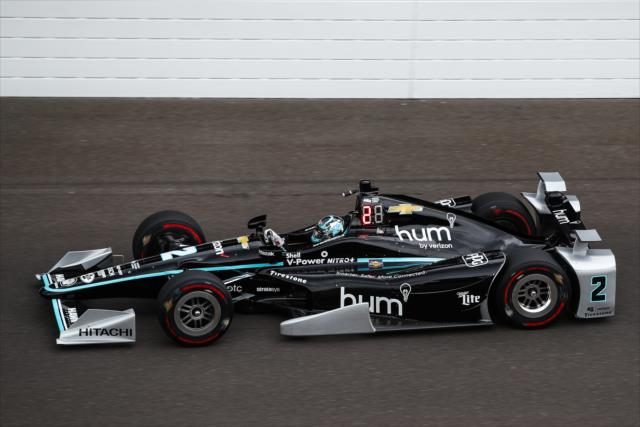 Any questions about how quickly Josef Newgarden would settle in at Team Penske were emphatically answered when he won at Barber Motorsports Park in his third start for the legendary team.

But the real mark of a Penske driver is how he performs in the Indianapolis 500 and Newgarden is off to a less than perfect start.

He made a mistake on an in lap during a practice run last week at Indianapolis and crashed his Chevrolet, seemingly damaging his confidence in the process.

None of the Penske entries qualified especially well, with Will Power the only one of the five to advance to the ‘Fast 9’ group that competed for pole position.

The rest of the Penskes are clustered between 18th and 23rd, with all of the drivers hoping their Chevrolets are more competitive on race day with the so-far dominant Hondas.

“A crash like that lingers for a bit – I won’t lie to you – but you’ve got to get back on the horse pretty quick and get going because this place doesn’t wait for you,” Newgarden commented.

“I lost some sleep over it for sure and it’s unfortunate to have an incident like that.

“For me to have made a mistake is tough to swallow, but it’s one of those deals where I think you have to learn from it.

“We’d still like to be a little faster, but we’ll work with what we have and maximise it.

“There’s no telling how the race will go, so we’ll be prepared to adjust as necessary.”