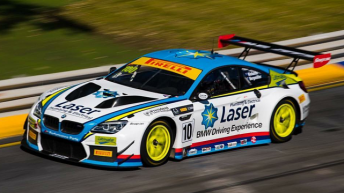 The Waikato circuit made its Australian GT debut just last year as the Hampton Downs 101, denoting the number of laps in the race, but has been extended to form a 500km race.

“There were a lot of sports we considered but this opportunity was very well crafted by the team at Hampton Downs,” said Scott Carr, New Zealand general manager of the Laser Group.

“We jumped at the chance to be associated with such an exciting event.”

“For us it’s a different channel to market and a great way to get our brand out there.

“We do a lot of radio advertising and this gives us a different dimension including TV exposure in New Zealand and Australia.”

“It shows that we delivered last year and we’re planning an even bigger and better event this year,” said Quinn.

“They’ve committed to us so now we have to deliver and give them value for money.”

The Laser Plumbing & Electrical Hampton Downs 500 will be Round 3 of the four-round Australian Endurance Championship, to be held on October 27-29.

The AEC kicks off this weekend with the Phillip Island 500.