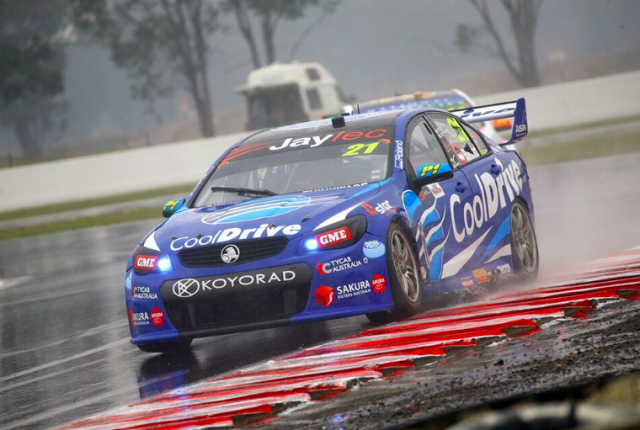 Todd Hazelwood is keeping his fingers crossed regarding the possibility of landing a breakthrough Pirtek Enduro Cup drive as Brad Jones Racing weighs up its co-driver options.

The Dunlop Super2 front runner has emerged as a contender for a seat alongside Tim Blanchard for the upcoming enduro season having undergone an evaluation drive at Winton last week.

Hazelwood made his Supercars debut in the wet additional drivers practice session at the Winton Super Sprint behind the wheel of the #21 Cooldrive Holden Commodore, ending the hit-out in 18th spot.

Brad Jones Racing is yet to confirm its co-driver line-up as the Albury squad elected to test potential pairings at the Victorian circuit.

Ash Walsh, who is expected to land a drive, joined Tim Slade in the #14 entry, while Macauley Jones took the wheel of #8 Nick Percat Holden.

Although the session was held in tricky wet conditions, Hazelwood hopes his performance will boost his cause of landing a ‘dream drive’ in this year’s Supercheap Auto Bathurst 1000.

“There is a co-drive opportunity available so we are talking with Brad and Tim(Blanchard) and hopefully we can come to a deal,” Hazelwood told Speedcafe.com.

“There are few things we have to discuss and we will go through the process. For me it would be fantastic to be able to get that opportunity so we will see what happens.

“I will be keeping my fingers and toes crossed.

“If I can get the drive it will be the highlight of my career.

“As a kid and like most drivers you dream about being part of the Bathurst 1000 and if I can get this deal it would be a big tick in the box.

“It would be a huge step in the right direction for my career. The aim for me is to get in the Supercars Championship and that would be a great stepping stone.

“The run out at Winton was good but unfortunately I didn’t get a massive read on what the car is like and I was really looking forward to see what the new tyres were like.

“If you look at the lap times I think I would be disappointed because we were 18th, but we were on a really good lap just before a red flag that would have put us halfway through the top 10.

“I think the team were happy and I was pleased with the job I did and hopefully that create an opportunity in the future.”

Despite the challenging conditions, Hazelwood believes the experience of working with BJR has opened his eyes to procedures he wishes to incorporate into his Dunlop Super2 program.

“It’s surprisingly funny how everything is so similar to Dunlop Super2,” he added.

“The processes are the same but they are just on a larger scale and with a bit more glamour.

“It was cool to listen in to the pre-brief and de-briefs everyday.

“It was good for me to experience that and there are a few things that I will try and incorporate into what we do at Matt Stone Racing.”

Hazelwood will continue his Dunlop Super2 campaign when the series heads to the Townsville 400 from July 7-9.