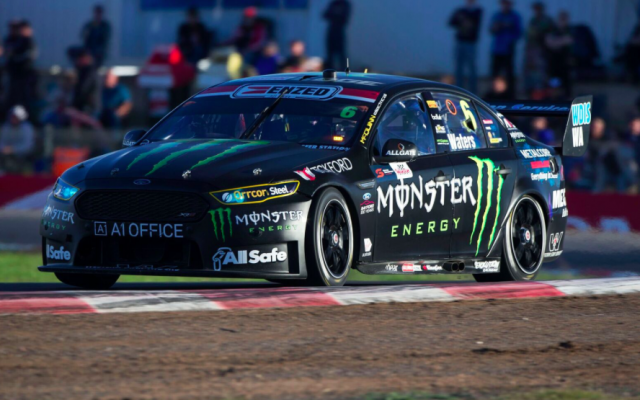 Prodrive Racing Australia is a match for the likes of DJR Team Penske and the Red Bull Holden Racing Team, says Cameron Waters.

Waters emerged as the Ford squad’s top performer on Sunday after coming through to score a career best equalling fourth in the 200km final heat of the Winton Super Sprint.

The 22-year-old has enjoyed a strong start to the season with yesterday’s result his fifth top 10 finish from 10 races.

While yet to score a podium, the Monster Ford driver feels his Prodrive Falcon is able to challenge the front running DJRTP Fords and Red Bull Holdens.

“I think we’re thereabouts,” Waters, who is lying 10th in the standings, told Speedcafe.com.

“Our car was pretty fast, it was probably as quick as the other guys, but it might just take us a little longer to get the car in the window.

“We can do it, we’ve just got to do it quicker.

“To finish in fourth is obviously quite good.

“There was a little bit more in it I think. We’ve got a fast car and I’m driving it well, so hopefully we can get that podium pretty soon.

“When you see it’s right there, it makes you pretty hungry. I gave it everything I could and just fell short.

“Going into Darwin I want to continue this form and hopefully I can keep the car in the top five.

“We went okay last year pace-wise, there was no results, but I’ve come a long way since then as well.”

Meanwhile, team-mate Chaz Mostert showcased strong pace during the weekend only for a mechanical drama to deny him a shot at victory in Race 9.

The Supercheap Auto Racing pilot could only qualifying 17th for Sunday’s race in his repaired car.

He made amends in the race by producing an impressive recovery drive to eighth position.

Mostert headed into the weekend with strong form having won at Phillip Island and scored a podium last time out at Barbagallo.

The Queenslander remains upbeat despite witnessing the gap to the championship leader Fabian Coulthard widen to 199 points.

“The car was a little bit looser than the day before, but to be honest there’s no excuse why it shouldn’t have been up there in the top five or six,” Mostert told Speedcafe.com.

“I didn’t really expect to get back up there.

“I shouldn’t have qualified the car back there, something was probably dwelling on me from yesterday’s results. You can’t afford to be doing that either.

“On the bright side the car still felt pretty good in the race.”