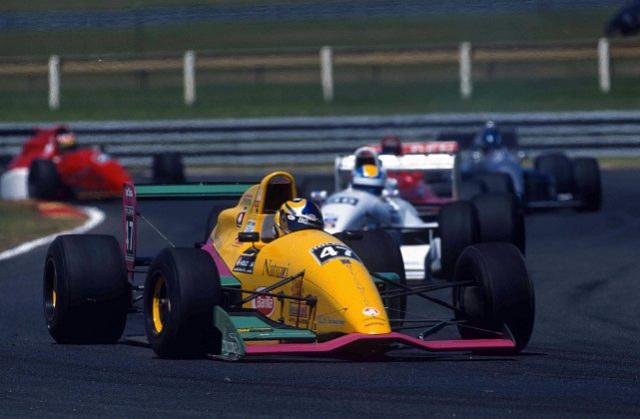 Scott Dixon runs in Formula Holden at Sandown in 1998

This weekend, the 101st Indianapolis 500 will roar into life at the famed Indianapolis Motor Speedway with an Australian-born Kiwi heading the charge from pole position.

Chip Ganassi Racing’s Scott Dixon (it still feels strange not typing ‘Target’ at the start of that sentence!) qualified fastest on Sunday and will lead away the 33-car field this weekend in the race that all IndyCar drivers are aiming to win – plus a bloke from Formula 1!

But, as our AN1 Images Memory Lane photo today shows, the man they call the ‘Iceman’ of IndyCar racing started his ‘wings and slicks’ open wheeler career here on Aussie shores.

This shot is Dixon in action in the 1998 round of the Australian Drivers Championship for Formula Holdens. Driving a Reynard 92D (former Formula 3000 chassis) for Simon Hartwidge’s SH Racing, Dixon went on to win the Gold Star that year after a season-long battle with fellow young gun Todd Kelly.

Dixon won four races that season (including the season-opener at Sandown) to win the title over Kelly, Mark Noske, Brenton Ramsay and Austrian Markus Friesacher.

Dixon and Kelly actually came back together down the track, sharing a Jack Daniel’s Commodore at the Gold Coast 600 V8 Supercars event in 2010.

But this weekend Dixon is lining up for his 15th Indianapolis 500 start, all of them coming with Chip Ganassi’s team since driver and team moved full-time into the-then Indy Racing League in 2003.

Dixon won the race in 2008 and was runner-up in 2007 and 2012, claiming no less than eight top-six finishes in the American classic.

This year he and Ganassi’s team have moved to Honda power for the first time since 2013. In the eight Indy 500s that Dixon has driven for Ganassi with Honda power (2006-2013) he only finished outside the top six once!