Honda to race in UK despite Hayden passing

Honda to race in UK despite Hayden passing 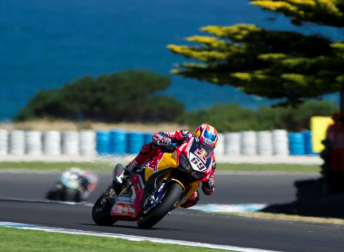 Hayden in action at Phillip Island

The Red Bull Honda World Superbike Team will compete at this weekend’s round of the championship at Donington, just days after the passing of Nicky Hayden.

Hayden was midway through his second season at the Ten Kate-run team when he was hit by a car while cycling in Italy, succumbing on to severe head injuries on the following Monday night.

The team has announced that it will race at the English circuit but there is no word on who, if anyone, will be team-mate to Stefan Bradl.

Management of the team and Honda paid tribute to Hayden, who enjoyed one race win with the team at the Malaysia round in 2016.

“It seems impossible that Nicky is no longer with us,” reflected Marco Chini, Honda Europe’s WorldSBK Operations Manager.

“Nicky was not only an outstanding rider, but also a shining example of sporting ethos and professionalism.

“Seeing Nicky return to the top step of the podium in Sepang last year was very special and also his podium at Laguna Seca was a real proud moment as Nicky was always so passionate when racing in front of his home fans.”

“This is a huge shock to me, the whole team, the World Superbike paddock and actually the entire racing world,” said ten Kate.

“We only had the pleasure to work with Nicky for one-and-a-half years but we came to know him like all his previous teams spoke about him: fanatical about bikes, hard-working, charismatic but above all, he was pure and genuine. He was Nicky!”

The UK round of the World Superbike Championship takes place from May 26-28.