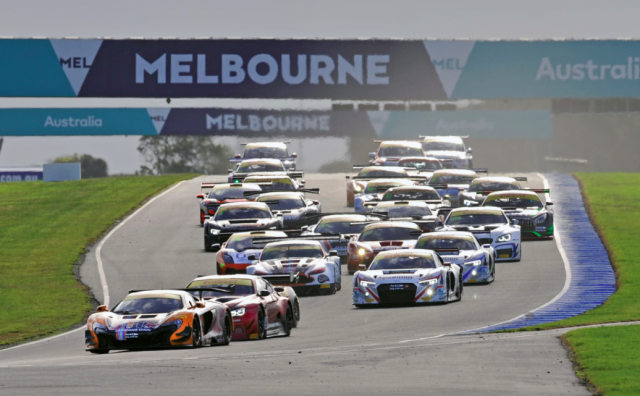 The Australian Endurance Championship will begin at Phillip Island

Organisers have confirmed a 19-car field alongside a new pit stop procedure for the opening round of the Australian Endurance Championship at Phillip Island this weekend.

The four-round series begins with a 500km enduro around the fast and flowing Victorian circuit with teams welcoming a host of professional drivers including former Supercars champion Garth Tander.

The championship has however confirmed changes to its pit stop rules ahead of the season opener.

Australian GT had been set to scrap its variable pit stop times in favour of a standalone minimum stationary time system in line with the Blancpain GT Series in Europe.

However, following consultations with competitors a hybrid system has been developed for this year.

The base pit stop time has been reduced to 40 seconds par car with driver seeding times then added to that figure.

Teams will have to complete two compulsory pit stops during the race.

“It was a combined decision made by how many teams would enter European style driver combinations and feedback from the teams from last year,” Collier told Speedcafe.com.

“We have reduced the mimmim base time for each car but we still have the driver seeding times added to that.

“We have made simpler in the regulations but fundamentally there has not been a lot of changes (from last year).

“There will be two compulsory pit stops but the racing is only 12 laps longer than last year so we didn’t need to make it three compulsory stops.

“A lot of the teams have said that fundamentally it is not broken so it doesn’t need fixing.”

The event has been unable to attract a group of international drivers this year, aided by a clash with the prestigious Nurburgring 24 Hours, which takes place on the same weekend.

However, as previously reported a host of Supercars drivers and co-drivers have been confirmed to compete.

Luff will partner Fraser Ross in the McElrea-prepared McLaren 650S, while Tony’ D’Alberto has been enlisted to join Max Twigg in the second Scott Taylor Motorsport Mercedes AMG GT3.

Nissan Supercars co-driver David Russell will again team up with Roger Lago in the JBS Lamborghini.

The Supercars quartet are joined by experienced sportscar ace John Martin, who has also returned to the category to pilot the Walkinshaw Porsche with Liam Talbot.

The opening round of the championship begins on Saturday with a 40 minute practice session ahead of two, 20-minute qualifying outings.