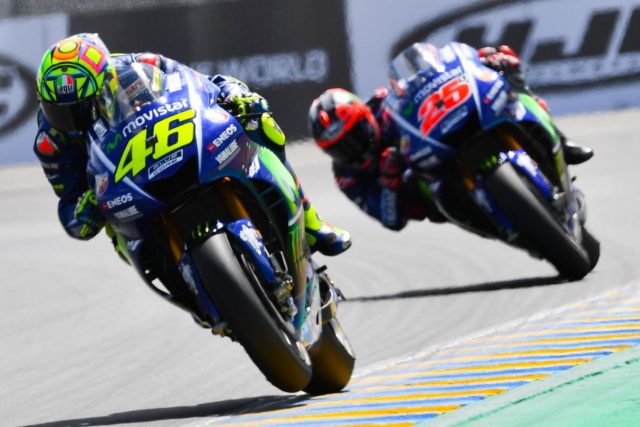 Rossi leads Viñales before the crash

Valentino Rossi has claimed that Maverick Viñales “cheated” in shortcutting the circuit after making a penultimate lap error in the French Grand Prix.

Rossi had passed Viñales for the lead on Lap 26 of 28 and quickly put 0.4s between he and his Movistar Yamaha team-mate.

Viñales pushed hard to try and stay in touch but ran too deep at the left-right Chemin aux Bouefs complex, taking to the bitumen run-off and shortcutting Turn 10.

While Rossi led into the final lap, the Italian ran wide and lost the lead before crashing bike #46 at the Bleus esses as he tried to catch up for a move in the final corners.

Rossi, who already lost the championship lead to the Spaniard with his initial error, believes that Viñales gained an advantage by taking the shorter path on Lap 27. 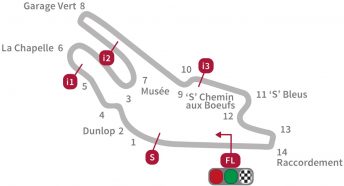 Chemin aux Bouefs effectively marks the end of sector 3 on the Le Mans circuit, and while timing data showed that Viñales lost time to Rossi through the third and fourth sectors on the lap in question, bike #25 was faster than its previous lap in the same half of the race track.

Notably, Viñales’ aggregate time through two sectors was also faster on Lap 27 than when he set the lap record on Lap 28, though on the latter he did deviate slightly from the race line to greet the chequered flag.

“I did not see it, but he cheated me a little bit by cutting the track,” said Rossi, who was handed a 0.5s time penalty at the US Grand Prix for cutting the track after a lunge by Johann Zarco.

“I did a very fast lap – I think 1:32.3s – but he cut the track in sector three and caught back up to me when I had a little bit of advantage.

“If I passed the finish line four tenths ahead, maybe I would not have made the mistake.

“The rules however are like this, and in any case I still made the error.”

Asked if he regretted trying to catch up Viñales after running wide, Rossi effectively reaffirmed his decision.

“There are days when you feel you can win and you have to try, otherwise you’re not at peace with yourself,” he said.

“Today I felt (I could win) and I tried. It was a stupid mistake, but it was still a good weekend, because I’ve never been so strong on this bike.”

Viñales insisted he did not gain anything from cutting the track when asked about the incident by BT Sport.

“When I did that, I lost a lot of time because I was right on the back of Valentino and then I was half a second behind,” said Viñales.

“It doesn’t change anything, because finally I entered (the final lap) more far (behind Rossi) than I was.”