Nicky Hayden ‘A world champion, in every way’ 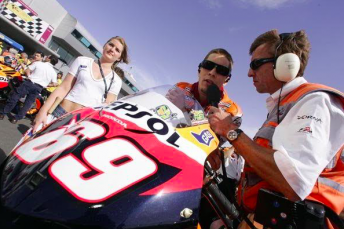 A 30-year veteran in the motorcycle road racing scene, Bracks worked as a pit-lane commentator for MotoGP’s worldwide television feed during Hayden’s championship triumph in 2006. He has also commentated on every Australian Grand Prix at Phillip Island since 1999.

Below Bracks offers an insight into the man behind the visor on the famous #69 bike.

Like every one involved in motorsport and every fan, I am struggling to come to terms with the reality that Nicky Hayden is dead. At 35. I have to write it that way so the enormity and the finality is clubbed into me. 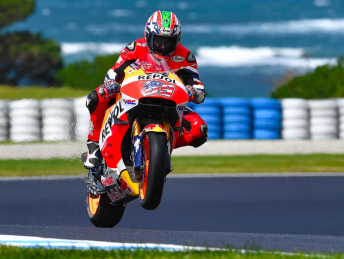 We knew he was in an extremely bad way but surely Nicky would pull through. Things like that don’t happen to our heroes, our legends. Not to Nicky. Not the ‘Kentucky Kid’. Oh, but yes they do.

Every word that has been spoken and written about Nicky’s demeanour and personality over the years, and more prudently, since his tragic accident, is true. He was a truly wonderful human being and a selfless man.

There has never been a bad word said about him, especially from his rivals. In such an ego driven sport that motorcycle racing tends to be, especially at the top level, that is astonishing.

That nature comes from his upbringing and the values he learnt as a kid.

From his humble beginnings, Nicky maintained that lay back southern easy going way of life and that is thanks to his parents, Earl and Rose; two remarkable folk who instilled the work and life ethics in their five children.

Earl was Nicky’s rock throughout his illustrious career and this event will tear the heart out of the man. For him not to be there is another gut wrenching memory. (Earl was unable to travel to the Italian hospital where Hayden was admitted)

Every time you think of Nicky Hayden, a smile cracks through. Sadly, those memories will now also be tinged with a tear and a lump in the throat. 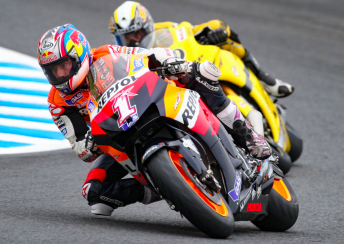 In recent times we might only see each other once, or twice a year during a race meeting but our greeting was always a firm “ bro” handshake and a man hug followed by a good chat.

It is impossible to sum up the nature of Nicky by just stating that he was a good bloke. He touched people in so many was. From the smallest gesture he would always acknowledge people seemingly no matter how busy he was.

Pausing to squat down next to a toddler to have a pic, to signing the back of someones shirt or turning around to acknowledge someone who had shouted a greeting at him from above the paddock, he was never rude or discourteous.

Nicky never forgot where he came from and I recall one fan saying to me as he walked past, “If I was ever to be famous that’s the type of person I’d like to be.”

My passion for bikes has taken me many places and I am humbled to be so fortunate of being in the inner sanctum of GP racing, meeting the people I have and to become friends with folk like Nicky.

We first met at the 2003 Australian Grand Prix in his rookie year on he Repsol Honda and we built a friendship from there.

I have very cherished memories from my time at the coal face, walking the pit lanes, the starting grids and the paddocks of world championship racing but Nicky is right up the top of those memories.

It is those memories that reflect the person that so many millions of people around the world admired, worshipped and loved, and that after the briefest of meetings he had made another friend. 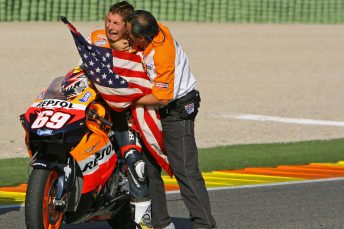 Hayden celebrates his title success in 2006

At every GP, I had my ritual where I would walk the track on the Thursday afternoon to get an idea of camber, track vision, blind corners etcetera, as it helped with my commentary and when talking to the riders.

Another ritual of a GP, besides riders jogging the track, is that they will grab one of the team scooters and do laps of the track.

It was at my second GP working with Dorna at Qatar. I stated doing my track walk when Nicky came past me on his scooter, slowed down and asked, “Hey, want a lift?” I replied that I’d love to but wanted to walk the track and take some notes first. He smiled, nodded and headed off.

Towards the end of the lap I heard a scooter slowing behind me, then that unmistakeable Appalachian accent, “Hey dude you have done your lap, jump on the back and I’ll show you the lines.”

So we did a couple of laps.

He was more impressed with me learning a track by walking it than I was being given a “dink” by a MotoGP rider and explained absolutely everything he could about the track and his mindset.

He thoroughly educated me in what a MotoGP pilot looks at, and what he thinks about when he is out there in his office, in that unique domain . 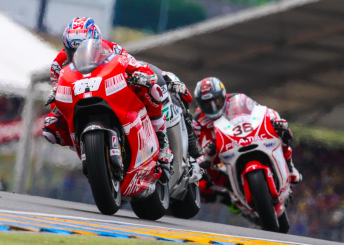 Hayden rode for the factory Ducati MotoGP squad from 2009-2013

Over the next couple of years there were other riders besides Nicky that gave me a guided tour of tracks like Shanghai, Turkey, Le Mans, Sachsenring and Mugello but he was the first. I did more laps with him than anyone else. He would be waiting for me to finish my walk.

My most enduring and fond memory of Nicky sums up the wonderful character of the man and how he liked to see others as happy as he always seemed to be. It happened a couple of days after he won the championship.

During the after race celebrations I had asked him for one of the world championship t-shirts. He agreed to give me one of the next batch that was being printed.

At the end of the day’s testing of the new 800cc machines, he saw me from inside the garage and asked, “hey Bracksy, did you get it?”

I walked in and replied absent-mindedly, “get what?”

“The shirt, I’ve been too busy.” My face lit up, to which he quipped, “ahh, I thought you mustn’t have been given it yet.”

As he was packing up his leathers, he directed me to go see Roger, the long-time logistics man of HRC, in the back of the team truck.

Bounding out there, Roger said “yeah it’s there, in the drawer,” but I was hesitant. One doesn’t just walk into a HRC truck and start opening drawers!

Opening the drawer there were a bundle of team shirts in plastic bags. I couldn’t see a championship shirt but Roger pointed at one and I saw a little bit of black marker-pen ink on part of one shirt. 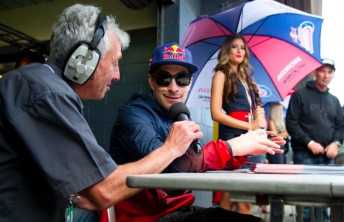 I slid the shirt out of its protective plastic and unfolded an official Repsol Honda Team collared shirt. Across the front is written, “Bracksy, thanks for all your help in ’06.” And signed, Nicky Hayden #1.

Stammering thanks to Roger, I turned to walk out the truck and there, at the bottom of the stairs, was Nicky with the biggest smile on his face and in his wonderful southern drawl asked, “ya like it then?”

I was ecstatic. Stunned. Amazed. Over the Moon.

I couldn’t believe that in all the rush and mayhem mixed in with media and sponsor demands of winning the title, then to commence testing a new bike, he took the time to personalise something for me, and be concerned to see if I liked it.

Nicky Hayden. A world champion, in every conceivable way. Now and forever.

Next Story Honda to race in UK despite Hayden passing