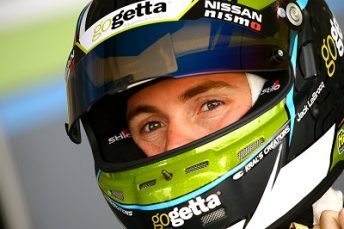 Jack Le Brocq has begun preparations ahead of his first solo appearance in Supercars with a test at Winton Motor Raceway today.

The Dunlop Super2 title contender will join the Supercars field as a wildcard runner in a MW Motorsport Nissan Altima at next month’s CrownBet Darwin Triple Crown from June 14-16.

Le Brocq jumped aboard the GoGetta-backed Altima today to evaluate the new 2017 specification Dunlop tyres for the first time.

The 24-year-old took part in Winton’s additional driver practice session last Friday, behind the wheel of Todd Kelly’s Nissan Altima, which he will drive in the Pirtek Enduro Cup.

“It just a good opportunity to test the new tyres for this year ahead of the wildcard round at Darwin,” Le Brocq told Speedcafe.com ahead of the test.

“It will be good to try out the new tyres so we have just got to hope it doesn’t rain on us too much.

“I think it (the wildcard program) is a great idea and I watched on at Winton last weekend and all the wildcards seemed to do a good job.

“There is two ways you can look at it you can go in all guns blazing or just go there trying to finish the races.”