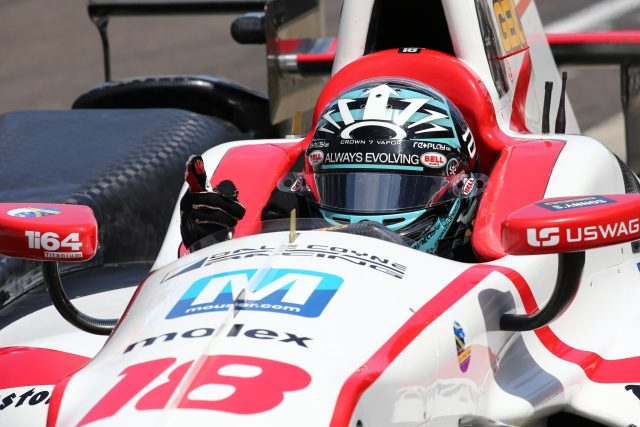 James Davison has turned his first, tentative laps of the month at Indianapolis Motor Speedway as he substitutes for the injured Sebastien Bourdais.

Davison ran 88 laps in a hastily cobbled together Dale Coyne Racing Dallara-Honda and managed a top speed of 223.670mph (359.962km/h) in Monday’s (Tuesday morning AEST) practice session, 28th fastest out of the 33 entries.

The Coyne team did an amazing job to put a car on track in the wake of Bourdais’ devastating accident during Day 1 of qualifying, having lost a car at Phoenix International Raceway three weeks ago when the Frenchman was swept into a first lap accident.

Davison revealed that he didn’t expect to show a lot of speed in his first practice session because the car he was running was a spare intended to be used at the following week’s Chevrolet Detroit Grand Prix. 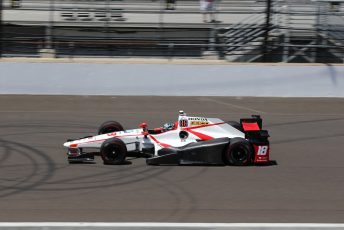 “We’re running a road course backup car so we knew we weren’t going to be particularly quick,” Davison told Speedcafe.com.

“We’re all aware of what our situation is here; it’s obviously very compromised and we just have to do the best we can with it and keep the car in one piece.

“There are no spares or anything like that, so there’s no excuse for doing anything negligent.

“We thought we just needed to try to get the handle well with a lot of cars in front of us because obviously we’re starting 33rd.

“We tried a number of the things as the day went on, and I would say it wasn’t the right direction.

“But we’re smarter from it now so we’ll just try to go another step forward with the car on Carb Day.”

Bourdais will miss the rest of the season with a fractured pelvis and hip.

Davison, who made several IndyCar Series starts for DCR over the last couple years, got the call to replace the four-time Champ Car series champion on Sunday morning and had a seat fitting that night.

“I knew there was the possibility somebody could get hurt, but you never wish for that,” Davison said.

“You’re around the paddock in case something does happen, and surely enough it did happen.

“I kind of couldn’t believe it and yesterday (Sunday, upon the confirmation) I didn’t know what to think because there were such mixed emotions to get the opportunity to run the race in such unfortunate circumstances.

“Obviously my thoughts are with Sebastien and (wife) Claire and the series needs him back.”