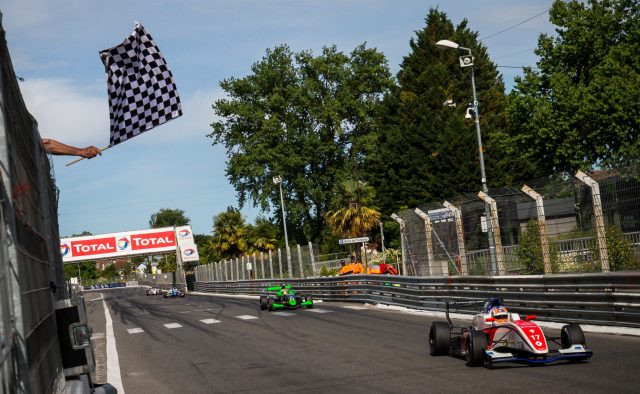 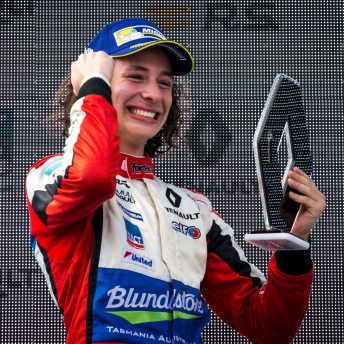 Australian Alex Peroni has taken a maiden race win in Round 3 of the Formula Renault Eurocup in Pau.

Peroni dominated qualifying for the second race of the weekend and fended off the challenge of Sacha Fenestraz at the start.

The pair traded fastest laps before Peroni’s lead peaked at just under 2s during the 21-lap race.

While Fenestraz caught up in the dying stages as Peroni came up on traffic on the narrow street circuit, the Tasmanian held his nerve to take the chequered flag first.

“It was tight, but I managed to keep the lead,” said Peroni of the opening corners.

“I then had to maintain the pace to win the race.

“It is a special feeling. We know now that we can win.”

The 17-year-old, who is the first Australian to win a Renault Eurocup race since Daniel Ricciardo in 2008, finished fifth in the Saturday race and now holds equal-fourth in the championship.

Robert Schwartzman won the opening race and leads the championship ahead of Round 4 at Monaco, May 26-28. 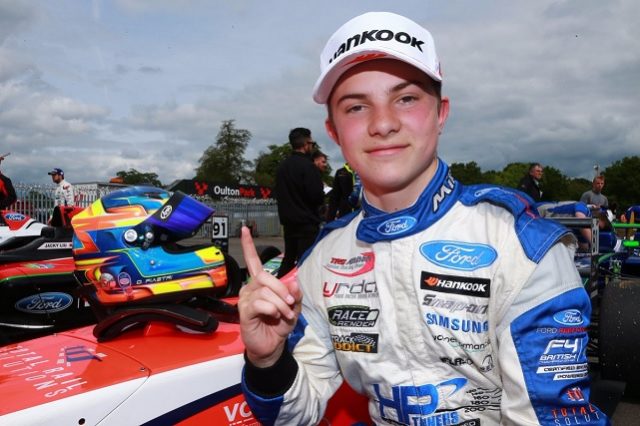 Oscar Piastri has broken through for his first win in British Formula 4 at Oulton Park.

Piastri started from position one in the second race of the weekend, a reverse grid affair, and held his nerve despite coming under intense pressure from Logan Sargeant throughout.

The race was called early when championship leader Jamie Caroline, who had won the opening race, made contact with Patrik and speared into the wall. 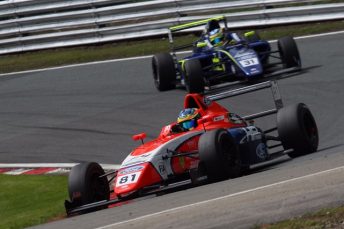 “To get this first British F4 win feels really good,” said Piastri, who finished sixth in the opening race.

“It would have been nice if it had been full distance and therefore full points, but it still means a lot.

“I think we knew that the pace was definitely there. There were just a couple of things we needed to fall into place.

“We’ve been up there throughout the season and I was just waiting for my chance to make it onto the top step.

“My initial start was really good and I built up a nice little gap. I pushed a little bit over the limit and made a couple of mistakes which allowed Logan to catch up though.

“Once he had caught up I just focused on consistently putting my car in the right place to keep him behind.

The final race, which was to form Round 12 of the championship, has been postponed to a later meeting. 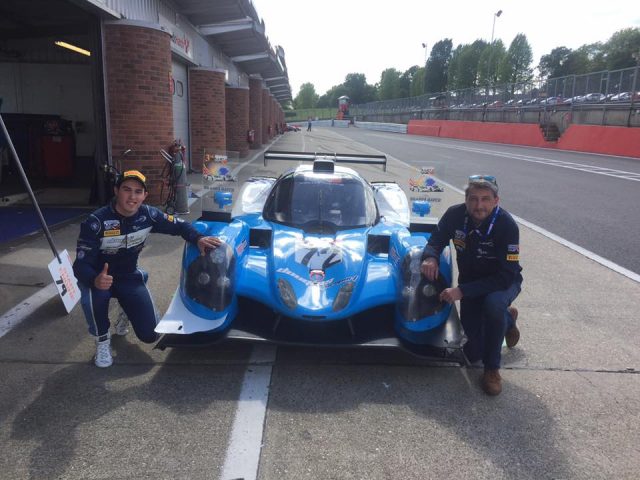 Thomas Randle has produced a strong drive to finish on the podium for the first time in British LMP3 in Race 2 at Brands Hatch.

Having been handed over the Douglas Motorsports entry in sixth place by co-driver Mike Newbould, Randle soon made up two positions in a single lap.

The Australian lost those positions when he had to serve a drive-through penalty for a short pit stop, but got back up to fourth before leader Jamie Spence ran off.

Not only did the incident bring about a premature end to the race, it elevated Randle and Newbould to the podium in an encounter won by Alasdair McCaig/Colin Noble.

The pair had finished Race 1 in fourth, with Tony Wells/Matt Bell the victors. 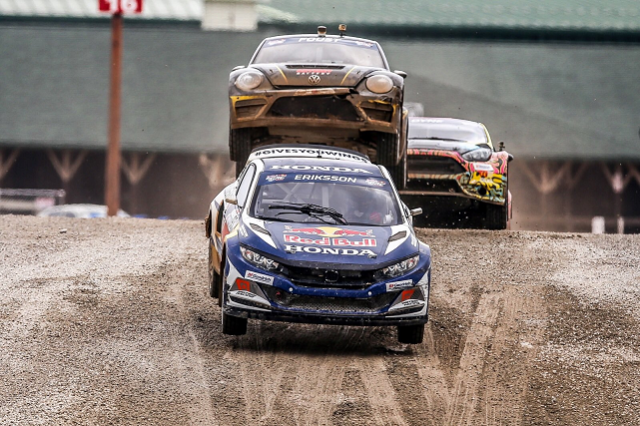 Sebastian Eriksson has won the Louisville round of Red Bull Global Rallycross, while Chris Atkinson’s weekend ended early due to mechanical problems.

Rain made for a dramatic finale all the way to chequered flag, with Steve Arpin (Ford Fiesta) challenging Eriksson (Honda Civic) at the last corner before falling 0.071s short at the line.

The top four were covered by less than 1s.

Atkinson couldn’t take the start on the second day of the event, sitting out his third heat and semi-final due to problems with his Subaru WRX.

Scott Speed leads the standings ahead of a double-header round in Thompson on June 3-4. 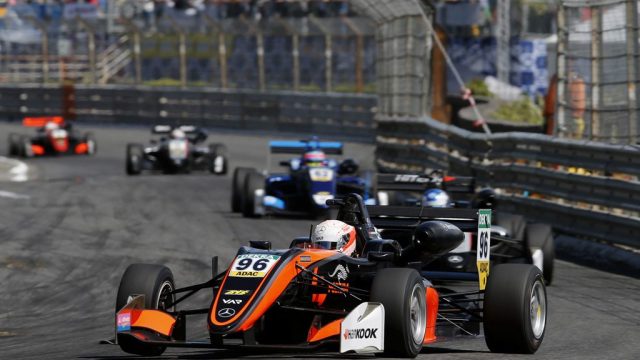 Joey Mawson has failed to earn any championship points after two DNFs in Round 3 at Pau.

The Sydney-born driver had moved up from fifth on the grid to run third in Race 1 before he was caught out by light rain and slipped into the fence.

In Race 2, Mawson was classified three laps off the pace after hitting a kerb and damaging his suspension.

The Van Amersfoort Racing driver rounded out his weekend with another retirement due to front wing damage.

Joel Eriksson continues to lead the championship after a win for he and two for Maximilian Günther, with Round 4 at the Hungaroring from June 17-18. 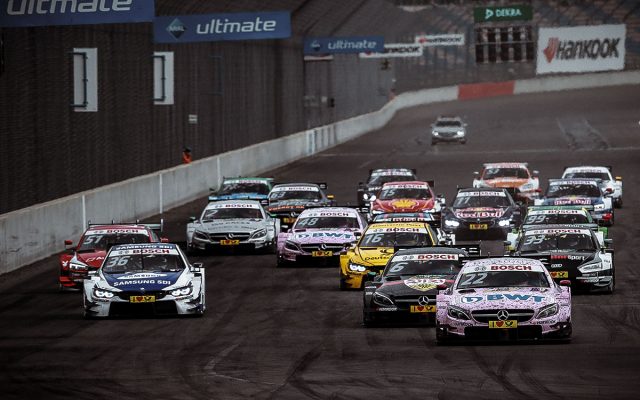 In a repeat of the Round 1 outcome, Lucas Auer has won Race 1 and Jamie Green Race 2 in Round 2 at the Lausitzring.

Auer (Mercedes C63) dominated Race 1, getting the jump from pole and leading by as much as 7s before cruising home after the pit stop cycle had been completed.

The performance was a carbon-copy of his Race 1 victory in Hockenheim.

Green (Audi RS5) had to work harder for his victory as Robert Wickens (Mercedes C63) led the first stint.

Green briefly led after his pit stop, was passed by Wickens, and then regained the lead again before taking victory by 6s.

Auer leads the points as the field moved to Budapest for Round 3 on June 16-18. 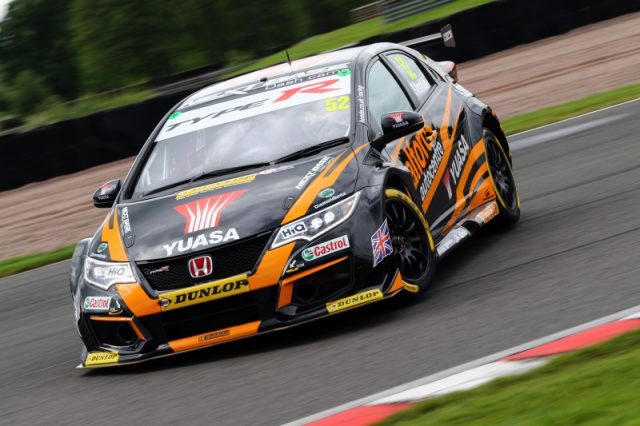 Gordon Shedden has taken over the points lead in British Touring Cars having won the third race in Round 4 at Oulton Park.

Jordan’s Race 1 win of just 0.28s came courtesy of a superior start from the front row, and while Matt Neal closed in as the leader’s soft tyres faded, he ran out of laps to make a move.

Sutton started Race 2 from third on the grid but took the lead on Lap 2 and was not headed again.

In Race 3, Shedden saw off Josh Cook in a bruising battle for second before passing leader Jordan after a mid-race Safety Car. 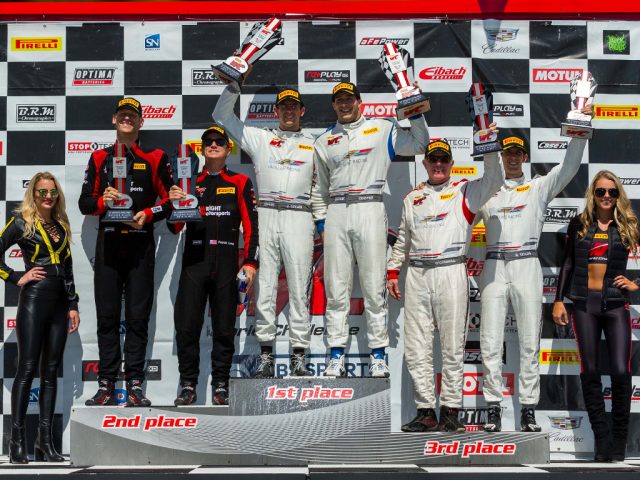 Michael Cooper and Jordan Taylor have fought from 22nd on the grid to win Race 1 of the SprintX round at Canadian Tire Motorsport Park.

Cooper started the 60-minute Saturday race in the #8 Cadillac and cut a swathe through the field.

Unlike most of the front-runners, Cooper had not yet pitted by the time Ben Barnicoat hit the wall on Lap 24 after contact with a competitor.

The incident triggered a full-course yellow, under which Cooper duly pitted, allowing Taylor to rejoin the race in the lead, ahead of those who had pitted earlier under green flag conditions.

Taylor ran away to a 46.6s victory in the final 16 laps, ahead of initial leaders Patrick Long and Joerg Bergmeister.

The Sunday race, which was to be Round 4 of the series, was postponed due to a thunderstorm and will be rescheduled for a later event.

SprintX will also headline the fifth event of the PWC season at Lime Rock, on May 26-27.