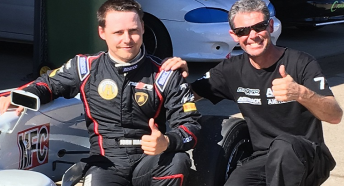 John Magro has won Round 1 of the Australian Formula 3 Premier Series in a weekend which saw three different race winners at Morgan Park.

Williams took pole position with a lightning-fast 1:07.999s lap, more than a second faster than the rest of the field, but it was Gilmour who took the early lead in Race 1.

Williams found a way past his Gilmour Racing team-mate on Lap 12, breaking the lap record two laps later on his way to victory.

The pair clattered into each other at the start of the reverse-grid Race 2, Gilmour running into Williams as he attempted to overtake front row starters Jason Hore and Shane Wilson.

Magro took the lead and won comfortably, ahead of Hore and Roman Krumins.

Nathan Kumar had made a strong start to run fourth but spun on Lap 3, bringing about a Safety Car.

Magro (Alpine Motorsports) leads Gilmour by six points in the standings, while Krumins is on top of the National class.

Formula 3 returns to Mallala Motorsport Park for the first time since 2010 when Round 2 is held from June 9-11.