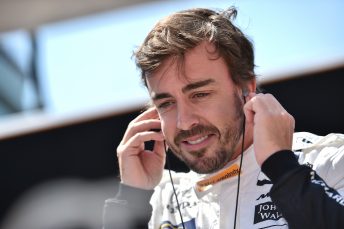 Fernando Alonso has admitted he was ‘happily surprised’ to qualify fifth fastest for his first attempt at running the Indianapolis 500.

Alonso improved on his performance on the first qualifying day, when he was seventh fastest at 230.034 mph.

The Spaniard’s Sunday run was made even more impressive by a last-minute Honda engine change that put his ability to make a qualification into jeopardy.

The orange #29 car painted in traditional McLaren papaya orange was pushed into the qualifying line in the nick of time.

“Very good job from the team changing the engine in record time this morning,” said Alonso.

“Guys from all six cars were working together on my car, and it was great.

“I really wanted to make a good performance for them because they worked so hard and there was a chance that we might not be able to qualify.”

Alonso had a minor engine problem during one of his four laps but otherwise was pleased with his qualifying effort.

He consistently ran as fast as his Andretti Autosport teammates throughout the week of practice and generally lived up to the hype his presence at Indianapolis has created.

“I was happily surprised with the speed,” Alonso remarked.

“I think today the car performed better than it did yesterday or in practice.

“The car was on the limit and I don’t know if it was possible to be on pole position, but definitely very close.

“I had an overboost problem in lap two out of the last corner, and it was like hitting the brakes.

“I almost went to the pits, but the speed was still good so it was just a matter of putting the laps together.”

Alonso related that he is enjoying his Indianapolis experience, though he expressed concern that his Race Day activities may start as early as 6 o’clock in the morning.

“The close contact with the fans is fun and I’m really enjoying that,” he said.

“Obviously, this is the biggest race in the world, and it felt that way from the very beginning here.

“Now with the weekend, you pick up the speed and you feel even more and more emotion with the fans coming for qualifying now.

“This is a very special event.”