Maverick Viñales has won a gripping French Grand Prix which was finally settled by two Valentino Rossi errors on the last lap.

Rossi had passed his Movistar Yamaha team-mate for the lead on the third-last lap and looked set to take his first win of the year before first running wide and surrendering the position, then crashing out altogether.

In a pivotal race in this year’s world championship, Marc Marquez also failed to finish after dropping his Repsol Honda.

Johann Zarco bagged a first MotoGP podium having been the initial leader in his home race, while Dani Pedrosa rounded out the podium despite starting 13th.

Viñales got the best start but it was Zarco who moved into the lead at Turn 3, with Marquez third and Rossi fourth.

Rossi passed Marquez before the lap was out and the top three of Zarco, Viñales, and ‘The Doctor’ largely ran together, save for a minor error for Rossi on Lap 12.

The Italian soon recovered the lost ground, but still needed to find a way past Zarco with Viñales having already reclaimed the lead on Lap 7.

Meanwhile, after making up six positions on the opening lap alone, Pedrosa ran fifth following a forceful move past Cal Crutchlow on Lap 12, the pair touching through La Chapelle.

That gave Pedrosa a clear shot at his team-mate Marquez, who seemed to be struggling slightly to match the impressive pace of the rest of the top five.

Just as #26 caught #93, Marquez lost the front of his Honda exiting Turn 2 on Lap 18, crashing in a race for the second time this year.

Pedrosa had also reset the lap record on Lap 14 and the stellar lap times persisted deep into the race, Viñales going even faster on Lap 21, both factory Yamahas on Lap 23 (Rossi by more), and Rossi on Lap 24.

Zarco couldn’t stay with the works bikes on his Tech 3 Yamaha, having chosen to run soft tyres front and rear while Viñales and Rossi opted for mediums, and the 28-lap contest became a race in two.

Rossi took the lead at his first attempt on Lap 26, the team-mates nearly touching out of Turn 3, and quickly put nearly 0.4s on Viñales.

Viñales had to take the run-off through Chemin aux Bouefs on the penultimate lap as he hustled to stay in touch but it was Rossi, with the race seemingly in his grasp, who ran wide at Garage Vert on the final lap and lost the lead. 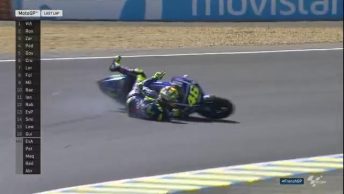 Worse was to come three corners later when the 38-year-old binned it altogether as he tried to get close enough for a late lunge.

While Rossi appeared disconsolate on the side of the track, Viñales managed to break the lap record yet again as he took the chequered flag and regained the championship lead from #46.

Zarco was 3s further back in the end, while Pedrosa gained a total of 10 positions for one of the unlikeliest of podiums.

Andrea Dovizioso (Ducati Team) finished fourth and Crutchlow (LCR Honda) fifth, while Jorge Lorenzo made steady progress from 16th on the grid to finish sixth on his factory Ducati.

The litany of retirements meant that both factory KTMs finished in the points (Pol Espargaro 12th and Bradley Smith 13th), while Sylvain Guintoli scored a single point as he filled in for the injured Alex Rins at Suzuki Ecstar.

Viñales’ championship lead is a solid 17 points after five rounds, with Pedrosa an unlikely second.

Each of the top eight in the world standing have retired at least once thus far in 2017, with Marquez joining Crutchlow in doing so twice.

Moto3 went the way of Joan Mir, but it was the incredible sight of half the field falling on oil which made headlines.

Mugello hosts Round 6 of the three championships on June 2-4.

VIDEO: Rossi’s emotion after crashing out of the race

But what an outstanding race from the Doctor. #FrenchGP pic.twitter.com/r2mH0A1QQx

Championship points: After Round 5