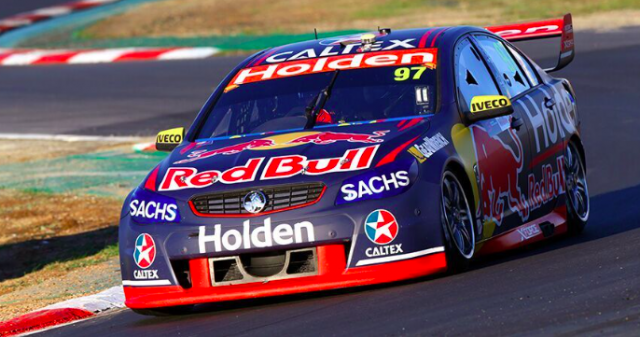 The reigning champion only assumed the lead with 10 laps remaining as a late Safety Car, caused by an incident involving Michael Caruso and wildcard runner Shae Davies, set up a thrilling fight for the win.

Whincup had led the majority of the race having jumped pole-sitter Scott McLaughlin (DJR Team Penske).

He briefly lost the advantage after the second round of pit stops to van Gisbergen prior to a frantic finish.

Whincup  ran wide at the final corner shortly after the restart, which saw van Gisbergen, who started third, take the lead.

Once in front, the Kiwi bolted to take his first points paying victory since the Clipsal 500 double win in March.

Whincup momentarily lost second to DJR Team Penske’s Fabian Coulthard, who was brought back into the fight, courtesy of the Safety Car.

The six-time champion fought back to ensure a one-two for Triple Eight, while Coulthard settled for third.

Prodrive’s Cameron Waters passed pole-sitter Scott McLaughlin in the final laps as the latter struggled for pace from the mid-race point, eventually ending up in fifth.

McLaughlin was forced to battle a gearbox issue and a cool suit failure during the race.

Coulthard continues to lead the championship albeit by four points from Whincup.

It proved to be a frantic start as Whincup out-dragged pole-sitter McLaughlin into the lead at Turn 1, while Jason Bright was fired off at Turn 2 by wildcard runner Macauley Jones.

McLaughlin soon fell into the clutches of van Gisbergen, who then dived by the Shell Ford at Turn 3 on the second lap pushing his countryman onto the dirt.

As a result, McLaughlin dropped to fifth behind Waters and Coulthard.

McLaughlin dived into the pits a lap later while leader Whincup reacted, rejoining the race ahead of the Kiwi.

Waters was next to take service followed by Winterbottom, while van Gisbergen led from Coulthard until the pair took their stops on consecutive laps as the race reached the quarter mark.

Once the stops had played out Whincup held the lead from McLaughlin, van Gisbergen, Waters, Coulthard and Garth Tander, who had started from 10th on the grid and Winterbottom.

Whincup soon built up a 2.4s lead at the front while team-mate van Gisbergen slid by McLaughlin for second at Turn 10 on lap 27.

Winterbottom was the first of the lead group to blink as he ducked into pitlane for his second stop on lap 29.

This triggered stops from McLaughlin, Whincup and van Gisbergen all in the space of two laps.

Van Gisbergen briefly undercut his team-mate for the lead before Whincup re-took the position at Turn 3.

Whincup managed to gap his team-mate but more importantly McLaughlin’s challenge continued to fade in third.

The sister DJRTP Falcon of Coulthard ran a long second stint but the strategy could only see him rejoin in fourth after his second stop.

He did however display much stronger pace than McLaughlin, passing his opposite number with 20 laps remaining.

The race was neutralised on lap 50 when Nissan Motorsport’s Caruso found the wall at the final corner after contact from the wildcard Nissan of Davies.

The stoppage allowed Coulthard to apply pressure on the Triple Eight duo in the final laps.

Meanwhile, at the front van Gisbergen assumed the lead from Whincup with the pair holding station in a frenetic finish to the race.

Tander came through to finish sixth ahead of another impressive drive from Erebus Motorsport’s David Reynolds, who started from 13th position.

Chaz Mostert climbed from 17th to eighth, while the top 10 was completed by Will Davison (Tekno Autosports) and Lee Holdsworth (Preston Hire Racing).

Rick Kelly was the top Nissan in 14th ahead of Triple Eight’s Craig Lowndes, who fought from 26th on the grid.

Stewards are set to investigate an opening lap incident between Jones and Jason Bright after the race.

Jones eventually finished the race in 25th while Bright recovered to 18th spot.

Post race investigations will also be undertaken for an alleged pit infringement for Winterbottom and the incident between Caruso and Davies, who was the top wildcard runner in 23rd.