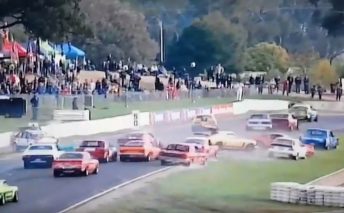 Touring Car Masters competitor Bernie Stack has been taken to hospital in Wangaratta following a multi-car crash at the start of Race 2.

Stack was caught up in a crash that claimed much of the field after Jason Gomersall lost control of his pole-sitting Holden Torana.

Having started 13th, Stack became embroiled in the crash, the Porsche 911 absorbing a heavy impact.

“Bernie Stack has been taken to Wangaratta hospital for precautionary checks with neck and back soreness,” a TCM spokesman confirmed.

A total of nine cars were involved in the opening lap stoush, seven of which will not restart.

Gomersall’s car sustained heavy damage to the front left corner of the Torana that ended his weekend.

The crash also ruled out Mark King, who will now likely miss the next round in Darwin, with significant damage to the front, rear and right hand side of the Chevrolet Camaro.