Ogier in the box seat in Portugal

Ogier in the box seat in Portugal Sebastien Ogier has taken advantage of an error by his Ford team-mate to lead Rally de Portugal after the end of the second full day of competition.

Ogier became the seventh different driver to lead this topsy-turvy encounter on rough dirt roads in the north of the country. He has just four speed tests in which to fend off Neuville on the final day to equal Finnish legend Markku Alen’s record of five Portuguese victories.

The M-Sport Ford Fiesta team-mates shared the honours with a win each in the opening two special stages as the Estonian stretched his advantage to 6.3sec. But he suffered brake and suspension damage in the impact and dropped nearly 90sec.

New leader Ogier stretched his advantage over Neuville to 23.0sec before the Belgian retaliated in the final test to give himself a glimmer of hope in his Hyundai i20 Coupe.

“I’m very happy with how my day went,”said Ogier.

“It’s been a very long time since I‘ve been able to do this kind of performance – having always been first or second into the stages. I think I did the same kind of driving as yesterday but the road position is quite different and I’m very pleased with the gap that we have managed to build.

“For sure the rally is not over yet and we still need to finish the job. With 16 seconds you can never relax completely so we need to continue in the same way – keeping the same speed and staying clear of trouble.

“We have some beautiful stages still to drive tomorrow and I really love Fafe – it’s fantastic. For sure we still have to push because no one is going to back off. We still need to give it all we have and the Power Stage is always important for those extra points.

“I’m really looking forward to this last day and hoping to bring home another good result for the team and the championship.”
Dani Sordo was third, more than half a minute behind team-mate Neuville. He struggled with his i20’s handling and was lucky to finish the final stage with a badly damaged rear wheel.

Tanak recovered to fourth after passing Craig Breen’s Citroen in the final test. A tyre choice mistake left the Irishman with badly worn rear rubber and he spun. The gap is 2.8sec.

Elfyn Evans completed the top six in a Fiesta. The Welshman was delayed by a puncture and a broken damper but ended almost 30sec clear of Finn Juho Hanninen, who dropped nearly a minute when his Toyota Yaris stopped in the penultimate test.

Esapekka Lappi conceded seventh after losing control of his Yaris on gravel-covered asphalt and hitting a wall. It cost five minutes and he slipped to 11th behind Mads Ostberg, a fever-stricken Jari-Matti Latvala and WRC 2 leader Andreas Mikkelsen.

After electrical issues hampered his Hyundai yesterday, it was a broken steering rack that ended Kiwi Hayden Paddon’s day. 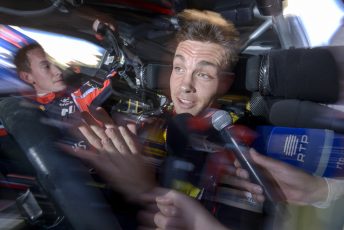 “We started this morning’s loop in a positive frame of mind despite the issues we had yesterday,”said Paddon.

“The team worked hard to replace the loom on the car to allow us to continue under Rally 2. We knew it would be tough as second on the road, but we were determined to push and have some fun. I enjoyed it!

“We had some good sideways moments and put on a good show for the fans. The times were never going to be representative with all the cleaning we had to do.

“Then, in the afternoon, our luck turned once again as we experienced a steering problem that ended the day early. Not a lot more to add, other than we’ll try to have a trouble-free final day tomorrow.”

Sunday’s finale is centred around the legendary Fafe roads. After an opening pass through the test, competitors drive two new stages before returning for the final live TV Power Stage, with bonus points for the five fastest drivers. The four tests cover 42.93km.