No penalties for Courtney/Percat Race 9 clash

No penalties for Courtney/Percat Race 9 clash 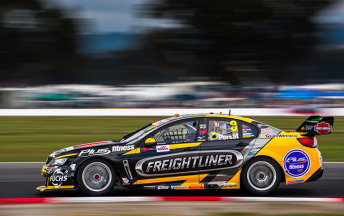 Nick Percat went on to finish 10th after the clash

Stewards have elected not to issue sanctions following an investigation into the Race 9 clash between James Courtney and Nick Percat.

The two drivers made side-to-side contact on the penultimate laps of yesterday’s race while fighting over 10th position.

The incident saw Courtney fire off into the gravel trap between Turns 3 and 4.

An investigation was completed this morning where it was deemed neither driver was wholly at fault.

Officials have however handed a five-second post race penalty to James Moffat for his role in bumping Courtney off the circuit during the opening lap of the race.