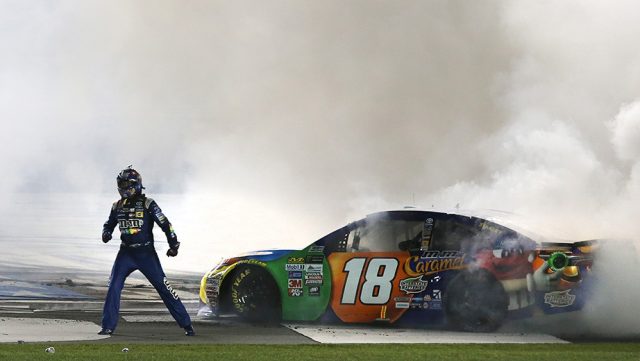 Kyle Busch has broken his duck in the Monster Energy NASCAR Cup at Charlotte Motor Speedway with victory in the All-Star Race.

Although it might not be for championship points, Busch did walk away with US$1 million and get the first victory in 2017 for Joe Gibbs Racing in the main series.

Busch made a dramatic three-wide pass on the final restart to get past Brad Keselowski and Jimmie Johnson and drive away for the victory.

“We’ve never won at Charlotte in a Cup car and we finally achieved that goal tonight,” said Busch said.

The All-Star race is unlike any other NASCAR race with a series for eliminations sprints setting-up the final group of races. It all came down to the final 10-lap sprint to the line.

Added into the mix was one set of softer option tyres, plus limited sets of rubber. Keselowski, who had no sets of tyres left, stayed out on the race’s final pit stop and was swamped on the re-start. That allowed Busch to move by him on the inside and up against the grass.

Johnson won Stage 3 to advance to the final 10-lap, 10-car shootout for the $1 million. Kyle Larson won Stages 1 and 2, leading all 40 laps in the process.

Kurt Busch and Jamie McMurray rounded out the top five.

A wide range of tactics were used and some teams got the better of themselves. Keselowski put on his option tyres, ran two caution laps, then came back down pit road to replace them. However, it meant they were no longer available to him, and he had to stay out on the final pit stop.

NASCAR stays in Charlotte for the longest race of the season the Coke 600 next weekend.