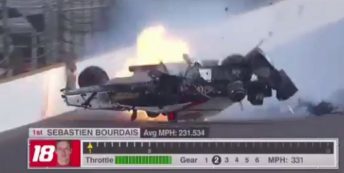 Sebastien Bourdais has suffered a high speed crash during qualifying for next weekend’s Indianapolis 500.

The Frenchman was fastest over his first two laps before losing the back end of the car on the exit of Turn 2.

Quickly snapping out of control, Bourdais attempted to chase the car up the circuit, only for it to spear into the barrier at almost full speed.

Bourdais impacted the wall with the front right corner, the car sliding along the barrier before turning upside down.

The car eventually slid to a halt, rescue crews quickly on the scene to tend to the former four-time Champ Car champion who was alert and conscious following the impact.