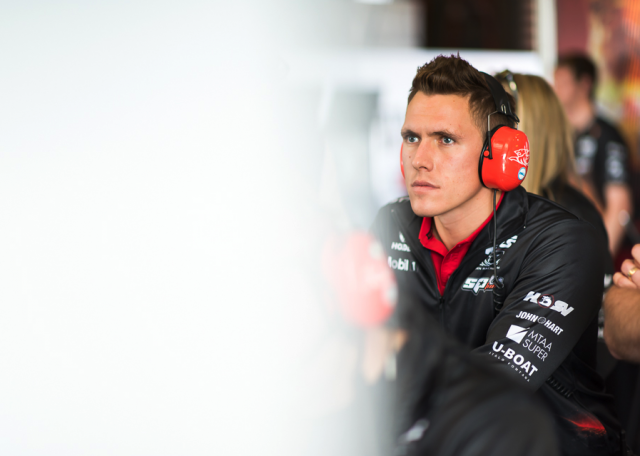 Mobil 1 HSV Racing will consider applicants from Australia and overseas for the vacant team principal role following the axing of Adrian Burgess.

Team owner Ryan Walkinshaw fronted the media today at the Winton Super Sprint for the first time since his decision to sack Burgess after a three-year tenure at the Clayton squad.

Admitting the call was not taken lightly, Walkinshaw confirmed an agency will be appointed to conduct a thorough recruitment drive for the Englishman’s successor.

Walkinshaw says a couple of targets have initially been identified, while also confirming the operation’s GT3 boss Mathew Nilsson, who is leading the team on a interim basis, is among the candidates to land the role permanently.

The Mobil 1 HSV Racing team owner will spend more of his time in Australia as the squad conducts its restructure.

“Short term we have Mat who’s taken over as interim team principal.

“Mat’s got a huge wealth of experience, he’s been with the team for many, many years, he’s one of the best guys we’ve got in the business and he’s been doing a great job with our GT3 programme – currently leading the championship there.

“Mat (Nilsson) is auditioning for the job, and it would make me very happy if we get down the route of looking at something internally, but we’re looking through the whole process.

“He’ll have a good swing at the opportunity and what a great chance it is for him to prove himself during this process.

“But in parallel to that, we’ll be going through a proper recruitment process with an agency and we’ll see which CVs we get through the door.

“There’s a couple of targets we’re looking at, but we’re pretty open minded.”

Walkinshaw says the need for fresh leadership was not merely a reaction to the poor performance at Perth, but a build up of disappointing displays.

“These things aren’t something that’s taken lightly. It certainly wasn’t a simple reaction to a poor weekend at Perth and other poor weekends before that,” he added.

“But I don’t think that it is unreasonable for someone in my family’s position to expect an increase in performance year on year.

“We haven’t seen that, and that was the reason why.

“All I can say is we wish Adrian all the best. He is a good bloke, and I believe that. I, like a lot of people, was close to him.

“This is business. It’s not personal. He understands that, we understand that, it’s part of the position he was in.

“But we wish him all the best and nothing would make me happier than seeing him back in this category, or in another category somewhere else having success.”