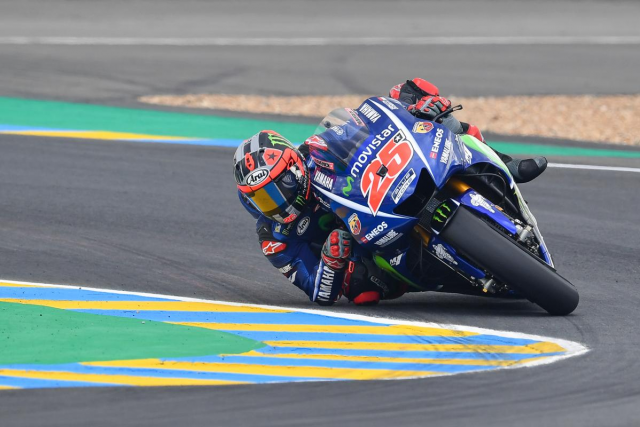 Maverick Viñales has taken pole position for the French Grand Prix as Johann Zarco made a remarkable effort to qualify third.

Jack Miller meanwhile escaped injury despite a frightening off exiting the fast Turn 1 sweeper which saw both rider and his Marc VDS Honda hit the wall hard during Free Practice 4. 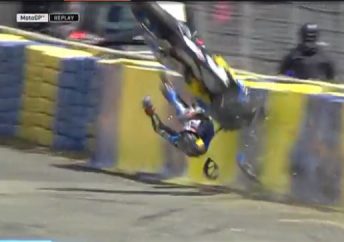 Miller locked the brakes as he began to make the hard stop into the Turn 3/Turn 4 chicane, losing control and running into the outside wall at speed.

Not only did the Australian escape serious injury despite hitting his head on the wall, he had already earned direct passage to Q2 and hence was not set back by his visit to the medical centre as per protocol.

However, having topped FP1 on Friday and finished third in FP3 earlier in the day, Miller qualified only 11th after yet another fall late in Q2.

Q1 already promised drama with both factory Ducatis as well as Dani Pedrosa having finished outside the top 10 after the first three practice sessions, plus the occurrence of full dry running for the first time only in FP4 just prior.

Zarco would provide the headline, however, opting to run through the 15-minute session on soft compound tyres without a pit stop.

The Tech 3 Yamaha rider led into the 12th minute before Pedrosa, who was also looking to go without a stop on his Repsol Honda, took over first position.

The pair both looked to have pulled off the strategy when the chequered flag came out before Andrea Dovizioso went fastest on his second run, provisionally knocking Zarco out of qualifying.

However, the Frenchman dug deep and somehow set the second-fastest time at the very last moment to advance to Q2.

Pedrosa and Ducati’s Jorge Lorenzo were thus the big names to miss the cut and will start 13th and 16th, respectively.

The second 15-minute session looked set to throw up more surprises when Cal Crutchlow sat at the top of the timesheets after the first run on his LCR Honda.

Zarco waited until the other 11 riders were just about to start their second runs before he even entered the circuit for Q2, and then went second fastest on his second timed lap.

The two Movistar Yamahas responded with Maverick Viñales fastest, just ahead of Valentino Rossi, before Zarco got himself back onto the front row in the final minute.

Viñales then became the first man to lap in the 1:31s bracket all the weekend, while Rossi improved after the chequered flag.

Crutchlow looked to have bumped Zarco from the front row before the 26-year-old rookie yet again saved his best until last to qualify third on the grid for his home race.

Crutchlow will share the second row with Marc Marquez, who crashed his Repsol Honda early in the session, and Ducati’s Andrea Dovizioso.

Bradley Smith made it two factory KTMs in the top 10 after both had gone directly into Q2 in an encouraging showing for the Austrian marque, the Brit starting next to Miller and Avintia Ducati’s Loris Baz.

The French Grand Prix will be run over 28 laps on Sunday from 2200 AEST.