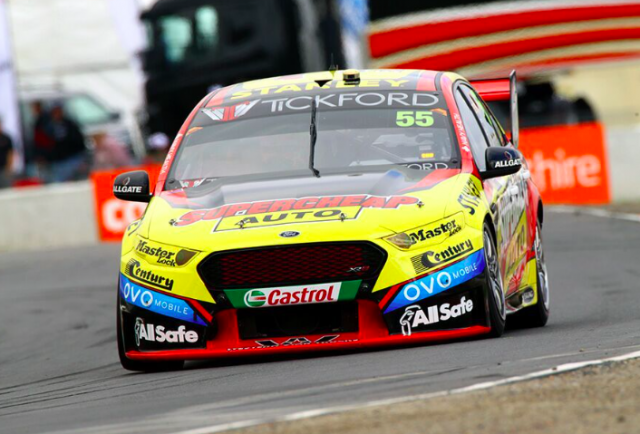 Having qualified second on the grid, Mostert’s race came to an abrupt end on lap 14 when the Prodrive Falcon suffered mechanical dramas.

It saw the former Bathurst 1000 winner, who entered the weekend just 31-points adrift of championship leader Fabian Coulthard, crawl back to the pits and record his first retirement of 2017.

The Supercheap Auto Racing entry had run second prior to taking service on lap five, rejoining the race behind effective race leader McLaughlin, who stopped a lap later.

Once back in the fray, Mostert received little more than a lap’s notice that not everything was well in the car before it finally cried enough.

“About a lap and a half before, it started making a heap of noise,” Mostert told Speedcafe.com.

“I thought it might have been maybe a bit engine related, generally you crack a header or some pipes or something and it gets a bit noisy.

“Once I saw the gearstick moving a little bit I knew there was a bigger issue.

“The immediate thought was a tailshaft failure, though upon returning to the garage the problem proved rather more terminal.

“That’s what I initially thought, but if it was tailshaft, the boys would have changed it and got us back out there.

“It won’t be until tomorrow morning that we know exactly what it is.

“Very disappointing to get a mechanical failure and put us out of today’s race.

“Overall the car’s been feeling great the last couple of rounds, so we’ll draw the positives.”

Mostert also fears the points dropped today could prove crucial later in the season, as the championship battle heats up.

“It’s a big bank of points that we missed out on today; In saying that the enduros are double that points again, there’s so many other factors in this championship to go on.

“It’s only early days and we’ve got to keep being consistent.

“We can’t have any more failures like this because it really does hurt the outcome.”