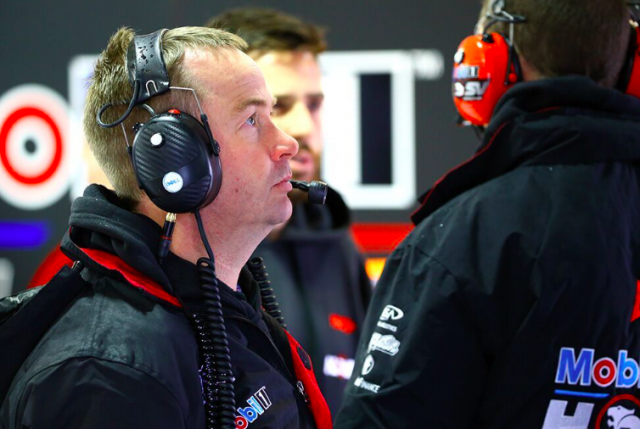 Mobil 1 HSV Racing interim team principal Mathew Nilsson has been impressed by the way the squad has reacted in the wake of Adrian Burgess’ departure.

The Clayton operation has been forced to undergo a restructure following last week’s decision to axe its former team principal after a poor start to the 2017 campaign.

Burgess’ removal has seen Nilsson promoted to the lead role on temporary basis while a successor is sought.

The move has seen Rob Starr take up a strategist role while Anthony McDonald continues as team manager.

Faced with a significant shake up heading into this weekend’s Winton Super Sprint, Nilsson says his team has not let Burgess’ exit affect them.

“Everybody has been great and have just got on with their jobs, I can’t ask for much more,” Nilsson told Speedcafe.com.

“It has just been business as usual really and everyone has integrated well.

“Anthony McDonald runs a good show with the garage, with all the boys, and he has got great support from Robbie (Starr) and the engineers.

“It (Friday) was a tough day for everybody not just us but the whole field with the wet weather.

“It was just a case of adapting to that and making sure we read the conditions and see what we could achieve.

“We have just got to make sure we do everything that we can control well.

“It is a cliche but that is all we can do and keep working well as a team to tick those boxes.”

Team owner Ryan Walkinshaw arrived in Australia last night before heading to Winton, where he is expected to face the media this morning for the first time since the decision to sack Burgess.

Meanwhile, Burgess has kept low profile since his departure but has offered support of the team’s decision to hand Starr a more hands on role via social media.

The team’s lead driver Courtney admits the dynamic in the garage has changed.

The 36-year-old also praised the team’s efforts in preparing a spare chassis for this weekend given the short turnaround time since Perth.

“It is obviously quite different with Adrian not around, as in the way the garage runs,” said Courtney.

“I can’t thank the guys and girls at Clayton enough.

“They’ve put in crazy hours rebuilding two cars in the last two rounds so it’s a credit to those guys.

“We’re here to go racing, a lot of stuff’s gone on over the last couple of weeks so we just want to put our head down and get some results.”

The Winton Super Sprint continues today with a 45 minute practice at 1050 ahead of qualifying session (1325) and a 40-lap race scheduled to start at 1600 local time.