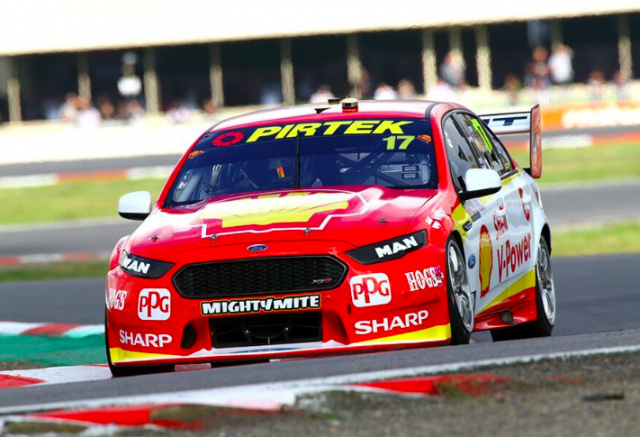 Scott McLaughlin snatched the Armor All pole position for Race 9 at Winton following a last ditch effort in a hotly contested qualifying session.

The DJR Team Penske driver made the most of his final run to leap to the top of the timing screens with a 1:19.38s after the chequered flag flew in the 15-minute session.

McLaughlin had been outside of the top five entering the dying minutes before his impressive final lap earned him a fifth pole position of the season by 0.16s.

His time, set on a third run, demoted Prodrive’s Chaz Mostert, who moved to the top of the times moments before the chequered flag.

“It was pretty rushed and I was just trying to get a nice gap there and I was lucky in the end,” said McLaughlin.

“There was a bit of traffic but lucky to hang on.

“I was pretty pumped after that one because when you work for them it makes it good.”

Triple Eight’s Shane van Gisbergen held provisional pole for much of the session before sliding down to third courtesy of McLaughlin and Mostert’s times.

“We’re not good enough on the bumps,” said van Gisbergen.

“We’ve got a good car on the flat corners but when we have to use the kerbs our car is not so stable.”

Jamie Whincup will line up alongside his reigning Supercars champion team-mate in fourth, while the sister DJR Team Penske Falcon of Fabian Coulthard was fifth.

Brad Jones Racing’s Nick Percat continued on his strong showing in sixth ahead of Rick Kelly, who was the top Nissan entry.

Will Davison’s Tekno Autosports Holden Commodore was eighth, while the Prodrive duo of Mark Winterbottom and Cameron Waters rounded out the top 10.

The two Mobil 1 HSV Racing Commodores of Scott Pye and James Courtney continued to struggle in 21st and 23rd respectively.

Supercars Race 9 is scheduled to begin at 1600 local time.