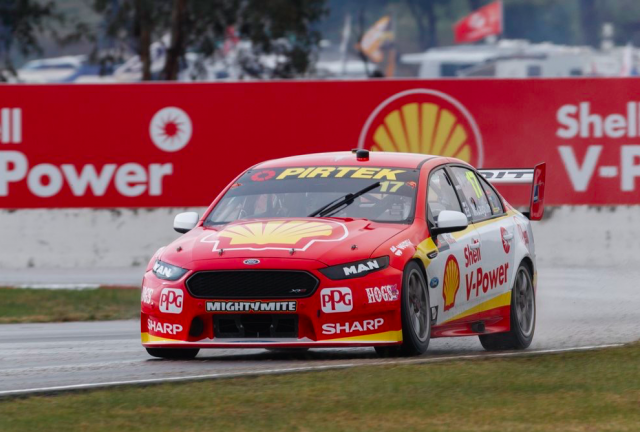 Scott McLaughlin proved the man to beat after posting a blistering effort in final practice at the Winton Super Sprint.

The DJR Team Penske driver pumped out an impressive 1:19.59s effort as teams logged their first meaningful dry running during the 45-minute outing at the rural Victorian circuit.

McLaughlin set his time with 12 minutes of the session remaining that saw him hold a 0.6s margin over the field until late efforts from Chaz Mostert (Prodrive) and Shane van Gisbergen (Triple Eight) on green tyres.

Drivers faced a slippery green track surface aided by the lack of rubber build up from Friday’s wet weather.

“It was weird. I think everyone probably had the same drama because no one went quicker on greens but the car felt not too bad,” said McLaughlin.

“I felt like I just maybe picked up a bit of understeer on the green set but you traditionally get that so we’ll work on it.

“It’s still a bit tram track-y out there, it’s quite dirty on the track, but it’s still reasonably quick, so it’s the same for everyone but it’s definitely a challenge for sure.”

Mark Winterbottom was sixth in the #5 Prodrive entry ahead of Michael Caruso, who was the fastest of the five Nissan Altimas on track.

Will Davison just missed out on the top 10 ahead of Mobil 1 HSV Racing’s James Courtney in 12th position.

Jamie Whincup could only manage a time good enough for 24th spot behind Craig Lowndes (23rd) as the Triple Eight duo struggled for outright pace.

“We just can’t get the front and rear to match together,” said Lowndes, who signed a new two-year deal prior to the weekend.

“We had a crack on a new tyre and that highlighted the issue, we hoped the new tyre would hide it but it didn’t.”

The session was halted briefly with just six minutes on the clock when wildcard runner James Golding lost control and backed his Garry Rogers Motorsport Holden into the gravel at Turn 6.

Golding managed recover this car back to the track without issue.

Shae Davies was the top wildcard runner in 21st spot despite suffering a small off at Turn 6.

The Supercars field will tackle a 15 minute qualifying session at 1325 ahead of a 40-lap race, scheduled to start at 1600 local time.