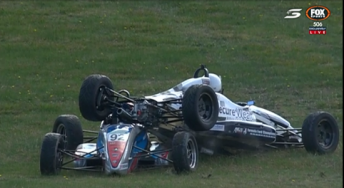 A spectacular opening corner crash at Winton Motor Raceway in the first Formula Ford race of the weekend left Mitchell Maddren trapped inside his car after coming together with Simon Hodges.

It propelled Hodges’ car skywards, coming down on top of Maddren and trapping the youngster in the Van Diemen.

A separate incident towards the front of the 30-car field accounted for Nicholas Carroll, Harrison Jones and Adrian Lazzaro.

Contact between Carroll and Lazzaro occurred as the duo squabbled over the apex of the first corner, Lazzaro’s left rear wheel breaking and slewing him off the circuit.

In the confusion behind a number of other cars found themselves pointing the wrong way.

Officials quickly elected to throw the red flag before a racing lap had been completed to allow rescue crews to attend to the stricken cars.

Their priority was the trapped Maddren, officials craning Hodges’ Spectrum which had been parked on top of it, Maddren climbing free from the car unaided once cleared.

Officials elected not to restart the race, declaring the session and therefore ruling it a non-event.