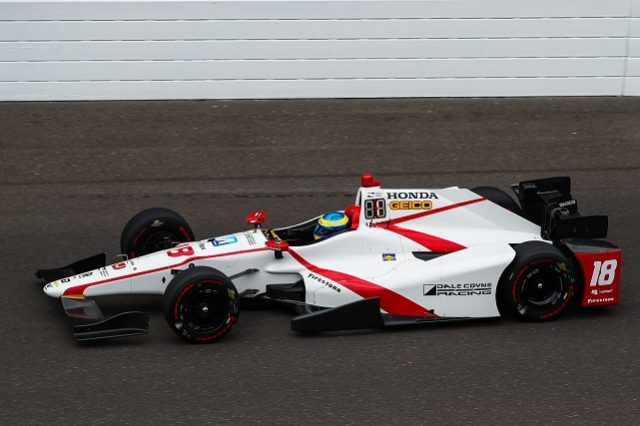 Sebastien Bourdais has set the benchmark on ‘Fast Friday’ at Indianapolis, while Fernando Alonso was fourth fastest for the third day in a row.

With cars in qualifying trim ahead of Saturday’s first day of qualifications, including an extra 10kPa of turbo boost, Bourdais lapped the 2.5mi superspeedway in 38.6074s (233.116mph, 375.164km/h) during the first half-hour of the day.

The Dayle Coyne Honda driver’s effort bested that of Ryan Hunter-Reay, who had set a 38.7711s within the first 10 minutes of the session in his Andretti Autosport Honda.

Hunter-Reay remained second for the duration, while the top two were reversed on the non-tow rankings.

Unlike most of the front-runners, Alonso’s fastest lap in the McLaren-backed Honda came in the final hour of the day, and in a good sign for qualifying was the first of four consecutive laps above 231mph.

Rain had threatened and ultimately cost drivers more than two-and-a-half of the six hours of scheduled running, hence the early rush to set lap times.

Juan Pablo Montoya led the Chevrolets for Team Penske in fifth, while team-mate Will Power was 16th.

Saturday sees a further 90 minutes of practice from 2200 AEST before Day 1 of qualifications starts at 0100 (Sunday morning) AEST.

Previous Story Alonso to shift focus to qualifying on Day 5