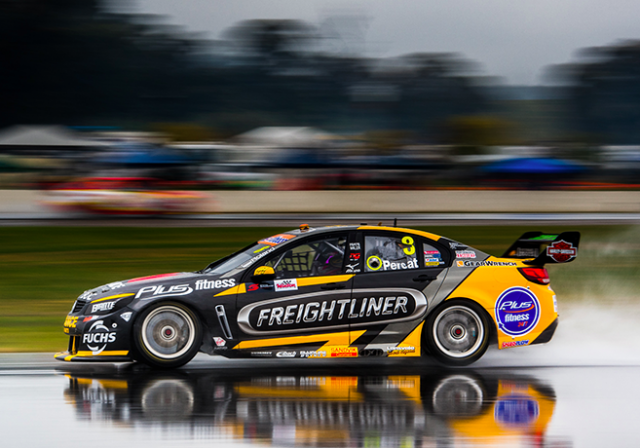 Nick Percat believes topping second practice at Winton will provide a much needed morale boost for Brad Jones Racing after an eventful start to the season.

The South Australian’s start to life at BJR has provided plenty of heartache having been involved in several incidents amid struggles to deliver consistent car speed.

Percat was caught up in an opening lap crash at the Clipsal 500 and was involved in a monster crash at the non-championship Australian Grand Prix meeting, which required a lengthy car rebuild.

His misfortune continued in Tasmania after being caught up in a 12-car pile up that necessitated further work to rebuild the car.

However, his Friday turned around by topping the times in second practice, courtesy of a late run on slicks as the Winton track dried.

“It’s good for BJR, and everyone on car #8 needs a bit of a morale boost,” said a relieved Percat.

“Even though it’s only Practice 2, when I crossed the line it was a little bit of a fist pump because it’s hard to be at top in any session at this level – especially when DJR Team Penske and Triple Eight are going so hard and so quick.

“I think for everyone at BJR and on car #8 it’s a bit of relief, just to get a decent result.

“It’s the first blip on the radar where we’ve shown the form that we hoped to show in pre-season.”

Team-mate Tim Slade, who scored a double victory at BJR’s designated test track last year, was ninth, while Tim Blanchard was 23rd in the Cooldrive entry.

Percat is hoping the team’s impressive form at the venue can be replicated this weekend.

“The whole team has been excited to get back here since they finished here last year,” he added.

“It’s definitely a good track for us; Fabian Coulthard was super fast here, Jason Bright has won races here, Tim won races here, so it’s one that we’ve been keen to get to and have a good weekend.”